I have heard a lot of good things about Titan. They’re one of the largest watch manufacturers in the words (5th largest to be exact) and ranked among the top 100 luxury watch companies. Brought and distributed in Malaysia by Chronosoft Sdn Bhd, I’ve seen their timepieces around and when I heard about the launch of their Moonlight collection, I dropped by Svago in KLCC to check it out.

The Moonlight collection by Titan is inspired by the beauty of objects captured in moonlight. Mr Vijesh Rajan (Business Head International Division, Titan Company Limited) was there to share the stories behind the creation of each of the watches.

I was particularly impressed by this one. It’s inspired by the Taj Mahal and features Swarovski crystals. This is called The Taj and is described as “a stunning illustration of the iconic monument, these timepieces draw inspiration from the awe-inspiring silhouette of the Taj Mahal on a full moon night”.

Mystic Luna is inspired by the moon goddess Luna and I like the beauty and elegance of the design.

Titan only uses Swarovski crystals exclusively in their Moonlight collection. The range is priced between RM 375 to RM 1,985 and there were models there to showcase the timepieces.

The Moonlight collection is under Titan Raga, which is a range of exquisite watches for the modern women. This leans towards the more mature and luxurious target market and often features precious stones and gems embedded into the timepieces.

I also managed to examine their Edge range, which is the slimmest quartz watch in the world. You can see just how thin each one is. Amazing.

I also got a limited edition Titan watch!

This particular watch has a large face with 100 meter water resistance.

It has the Penang Bridge International Marathon emblem engraved into the back of the watch.

I like how there is a LCD display with digital timekeeping in addition to the regular chronograph and the day of the week is displayed as well.

The leather strap offers a practical functionality and I personally prefer leather straps for versatility but you can swap it out if you want.

I’ve been using this watch exclusively for almost a month now, both in KL and in my business dealings in Sarawak and I love the way it’s appropriate for both work…

Titan has a range of watches for both men and women and if you’re keen to hear more about it, drop by their website at Titan World or interact with them on the Titan Facebook page.

That is my particular pet peeve. I hate it when people are late.

It shows that you think your time is more valuable than mine.

I don’t care if there’s a traffic jam – leave earlier if you know it’s going to be congested. There’s no excuses for being late.

I always try to be early and in the few occasions I can count on my hand that I’m late, I’ll call ahead and tell the people I’m meeting up with that I will be late, citing the reason(s) for my tardiness.

However, just now, I got lost (NO EXCUSES!) due to my GPS and was one of the last ones to arrive. I did call ahead to say I’ll be late (my GPS told me to go down an extremely narrow pedestrian walk and I scraped the front of my car trying to reverse out) but I still feel really bad about it. For every Garmin GPS user, it is very important that they keep on updating the maps to enjoy the latest and unknown territory. Sometimes, Garmin issues map updates with some unique features which you were not able to experience in the older Garmin GPS devices. To know about how to update garmin gps go through this.

I think it’s my obsession with time. I suspect it also has something to do with my past.

Back then, everyone had to wait, even celebrities (read Life by Keith Richards). It’s a mixture of two things – people in this particular line of work are generally tardy, especially if they are consumers too. However, it’s most of all, a power play.

It practically shouts – I HAVE SOMETHING YOU WANT AND YOU HAVE TO WAIT THE ENTIRE GODDAMNED NIGHT FOR ME AND THERE’S NOTHING YOU CAN DO ABOUT IT. HAH!

It’s an expression of dominance. I know. I’ve done it before, sad to say. In closed markets like that – you have no choice. You wait.

I’ve waited eight (8) fucking hours IN MY CAR about 9 years ago when I haven’t established myself in a new place. He was the only person I knew.

I had delusions of shooting the guy in the face and that was what sustained me. I didn’t do it though. It would have gotten me shot as well, if not at that time, then sometime in the near future.

…when he finally came, I had to fork over the money with a shit eating grin on my face.

It’s degrading and shameful. You hate yourself, but still, you wait, coz the hold it has over you is stronger than your pride. Fuck, it hurts to admit that, but it’s true.

…but that’s all in the past now. I have started a new life (and brought over the emotional baggage where I abhor waiting

I still have a thing about time though. I don’t like to be kept waiting and I don’t keep others waiting.

Being on time is a virtue a lot of people don’t get. If you say you’re going to be there at a certain time, then be there!

That is what I meant to say in this post – either be on time or inform the other person and postpone it to another date if you can’t make it.

Don’t make people waste their time waiting. Time is something you’ll never get back.

I get angry enough to tackle a train when kept waiting. That’s my pet peeve. 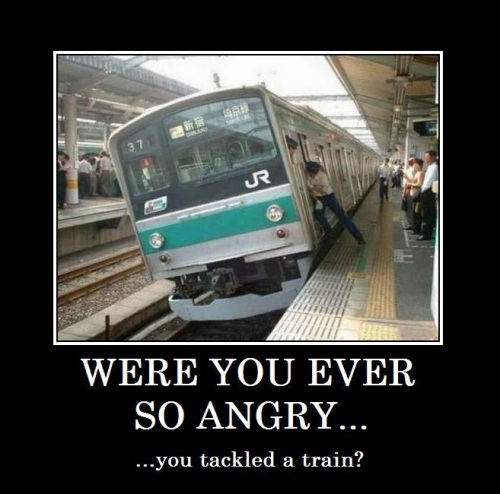 What’s yours? Were you ever so angry you tackled a train?

We never turn our back on it and we never ever allow ourselves the SIN of losing track of time.
– Cast Away 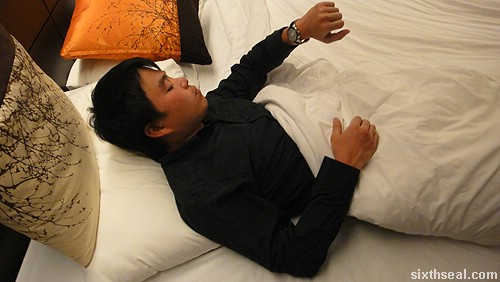 I am very particular about time. It harks back to an incident where I got locked in the public library when I was a kid coz I went to the gents near closing time. We didn’t have cell phones then so it took a while for my mom to realize I was missing and even longer to get security to open the grill. Needless to say, that experience was rather unnerving since I still remember it. 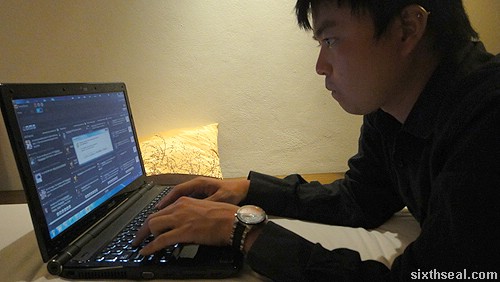 Ironically, I’m not much of a watch person. I keep track of time by using the computer’s lower right clock feature when I’m at work and a cell phone when I’m out. However, I can appreciate having a fine timepiece. A lot of people consider a watch an important accessory for men – a status symbol of sorts. Personally, the importance of a watch can be summed up with one word:

This only works with watches. Let’s say you have an important appointment to go to and you’re in a similarly important discussion. Dilemma! You wouldn’t want to be late for the next meeting and you ALSO don’t want to offend the people in the current discussion. 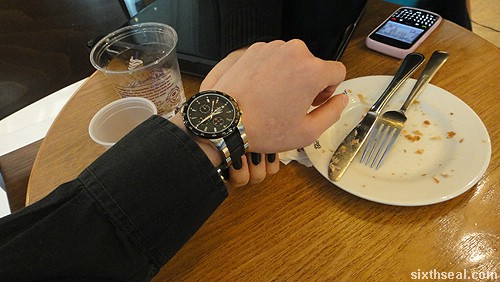 Make sure you discreetly glance at your watch when the other person is watching. This will generally project a hint that you’re in a bit of a rush and allow you to exit gracefully without a social faux pas

This won’t work with my Blackberry since people would assume I’m just checking work emails.

That’s the importance of a watch and now I know why so many working professionals wear one. 😉

I’m not in the habit of wearing chronographs so it surprised my friend Michelle when I had the ellesse Sportivo on. I have to admit, it looks very nice and she was rather impressed with it as well. 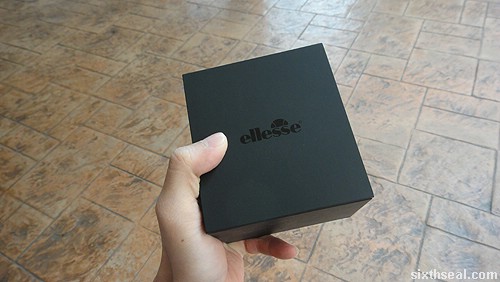 ellesse started out as a sports apparel brand from Italy but have since expanded into timepieces with ellesse TIME. I got one of the Sportivo collection for men. This stainless steel ellesse watch contrasts well with the black textured PU middle links around the bracelet. It has a very cool black dial too – large and stylish with three separate counters and a date display. 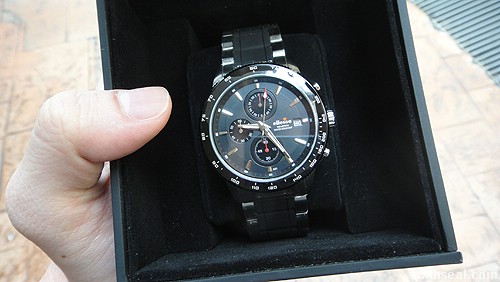 This watch has all the features a good timepiece would have, like a tachymeter, but the best thing about the ellesse Sportivo is that it looks good and feels solid. The black/silver color scheme works very well – the red highlights is a real attention grabber too! It’s also water resistant up to 100 meters so you won’t have to take it off when you’re in the pool. 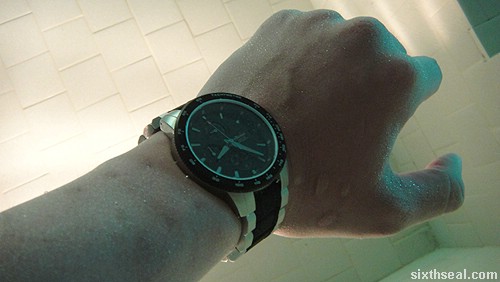 ellesse is running a contest where you share a photo and story about a touching moment in your life. It’s really simple to join and here is my entry: 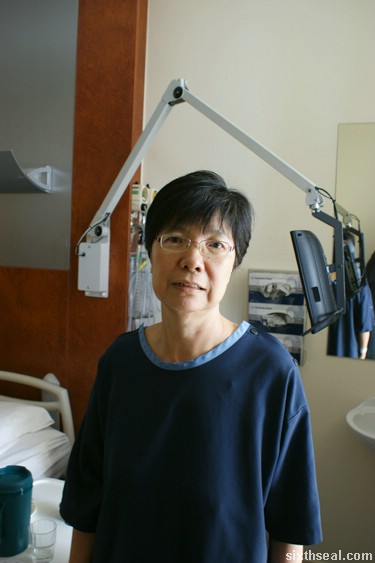 If I have 1 second with the world, I won’t give the usual Miss Universe crap about “World Peace”.

I don’t exactly have a very close relationship with my mother. We were always at odds for as long as I can remember and truth to be told, I used to secretly blame her for a lot of my personality traits. She worries a lot, over small and insignificant matters and somehow that passed on to me during my formative years.

She expects nothing less than perfection from me, using the rotan and vacuum cleaner tube liberally when I got anything less than 90/100 for my school exams. 90 would get a disapproving frown and a scolding. 95 would get a nod of acknowledgment, not approval. 99 got me a slight smile in the form of an almost insignificant upwards twitch in the corner of the mouth, which is quickly replaced by the oft repeated comment – “It’s just 1 mark short of 100. You could have done better.”

I remember that very well coz my dad wasn’t around when I was in primary school so all the insane expectations kinda left me with very low self esteem. I figured I just wasn’t good enough for the world. I was never going to be exceptional. I will always be mediocre.

I don’t blame her now though. I guess time and age changes perceptions.

It’s hard to be a parent.

My mom was diagnosed with lung cancer a couple of months ago and had to undergo an operation. I flew down to New Zealand before she went for the surgical procedure and one thing that surprised me was how well she handled everything. She trusted in God and was never fearful.

The trip also made me realize how estranged we’ve become.

She made it through and is recovering now, and I think my newborn niece had a lot to do with that. I wonder though, would I ever forgive myself for not setting things straight if she didn’t make it through? 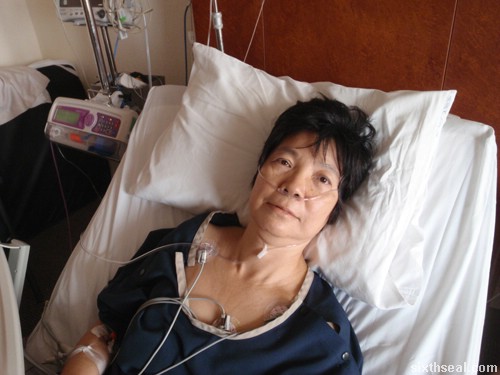 I’m always closer to my dad and although my mom nags a lot, she does it coz she loves me in her own twisted way (and I mean that in an affectionate manner). 🙂

I’m not going to pretend to be magnanimous and go on about stopping poverty, helping starving kids in Africa, or somehow magically cease the tense situation in the Middle East when the UN couldn’t even accomplish it in decades.

If I have one second with the world, I would just like everyone to be happy about themselves. No anxiety, stress, or self doubt. I want everyone to accept themselves and be proud of who they are.

I’ve learnt to appreciate all the things in life that I have now. The important things – my friends and family. Especially my mom, since our relationship has always been strained and I aim to improve that. I’m just thankful that it’s not too late for that. 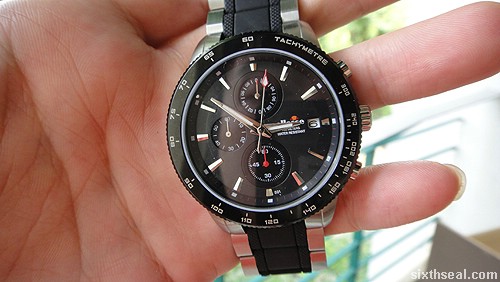 Do you have you own story to tell? Join the Touching Moment contest and stand a chance to win an ellesse watch!