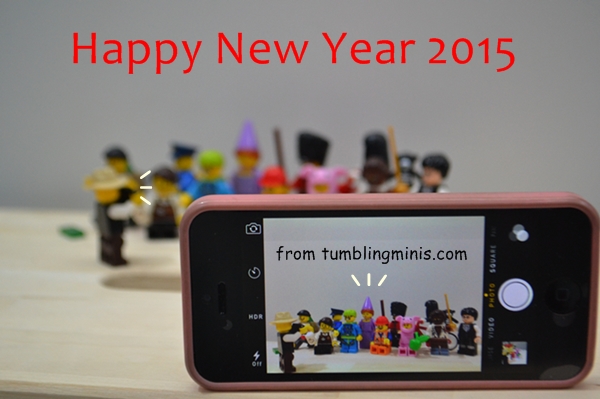 2014 has come and gone, and there are a lot of happy memories associated with it (and a few sad ones – we lost a member of our family to cancer, my late mom). It was a year where I learned to be a better person and a year of renewal.

Here’s to a better year in 2015 – may all your hopes be fulfilled, your dreams realized, and your worries conquered. Above all, may you find love, joy and meaning in everything you do.

It’s Christmas Eve today! We actually celebrated this year’s Christmas dinner earlier since the kids have tuition and other Christmas party commitments later in the week. Here’s 8 things we did this festive season:

This was the first order of the night! We each had a Christmas cracker (the kids had two) and everyone pulled theirs with a partner.

I got a mini basketball game but the bigger one was looking at it with more than a little bit of envy. Haha. I could see it in her eyes but she was too polite to ask me for it so I exchanged mine with hers (a small deck of Mystery Calculator cards – the least popular one).

The smallest one got a purple hairband and a really cute pair of badminton rackets (complete with shuttlecock) which you can actually play with. The party favor my better half got was a pirate eyepiece. The biggest one also got a deck of cards – tiny ones but a complete 52 card deck. There were also selfie props in the box, which we used for our family Christmas photo.

I had roasted a turkey with cornbread stuffing and demi-glace earlier in the day and we all ate till we were fit to burst. It’s such a huge bird that I think I’ll be eating leftovers for at least a week!

It’s all good though and the demi-glace was delicious!

Dinner done, the kids couldn’t wait to break open the Chocolate Monopoly set so we all played a complete round. You’re actually supposed to eat the chocolates in the middle if you land on a particular color which is already taken but the kids unanimously decided to “keep the chocolate Monopoly pieces forever” so they can play with them next time.

I thought that was funny and adorable so that’s the way we played it. No one has ate even a single piece of the Chocolate Monopoly up to now.

I bought a quart of Borden Eggnog and doled it out while we were finishing the Chocolate Monopoly game. The bigger one liked it but no one else did except me – I *loved* it. Borden makes a really good eggnog – if you like *ultra thick* custard-like consistency. It’s like drinking crème caramel without the caramel.

It’s so thick you can hear the “glug glug glug” as it attempts to pour out:

The eggnog is more custard than liquid and spiced nicely with cinnamon too and it’s delicious when mixed with a little cognac (none for the kids, of course). Lovely stuff that you see on the shelves once a year.

We ate a lot of panettone last year and this year and we decided to get a 1 kg pandoro for Christmas Eve dinner instead. Pandoro is the speciality Christmas cake for Verona (it’s also popular in Venice) and tastes completely different from panettone (which is from Milan). There are actually six (!!!) different regional Christmas cakes in Italy.

I thought I wanted to expose the kids to different foods and since we already ate panettone, it was pandoro for the after-dinner dessert. Pandoro is also a sweet leavened product that’s dusted with sugar and shaped like a frustum. I love pandoro, you can scoop out the middle and add gelato inside and it’s meant to look like an 8-sided snow mountain.

I wanted to get a large real Christmas tree (it’s about RM 600) but my better half forbade it. The trees actually shed a lot of needles every day so it can be a chore to clean up after it. We settled for a fake miniature Christmas tree instead.

This was the part which the kids were most looking forward to. They have been huge fans of LEGO since the LEGO movie came out and we encouraged their creativity – it’s good for them. The collection that we’re getting for the kids is the LEGO CITY range and I bought them a large set with a large police set-up with boats.

It basically involves a generic LEGO bad guy escaping with pilfered cash and jewels in a boat while the police goes after him. The amazing thing is that the boats actually float in water! We each assembled a section and I finished up the most difficult part where a thread had to be tied into a hook to attach to the LEGO police boat – it actually has working parts that moves to winch the boat up!

We had a lot of quality time together with the kids on this one – various scenarios were enacted and played out. I role-played the lazy LEGO police who would not move out with the truck containing the boat until the kids got the police lingo right. Haha.

We actually have a new site dedicated to LEGO minis now, it’s primarily done by my awesome better half, who takes amazing posed photos with our growing collection of LEGO minifigures – the site is called tumblingminis.com

This is our Christmas 2014 family photo! It was taken with the selfie props from the Christmas crackers and I thought it made for a nice photo. It serves as a digital Christmas card too – I sent it to my dad and my sister and they both loved it to bits.

Here’s wishing everyone a Merry Christmas and a Happy New Year from all of us! May the festive season bring you joy, peace and love. 🙂