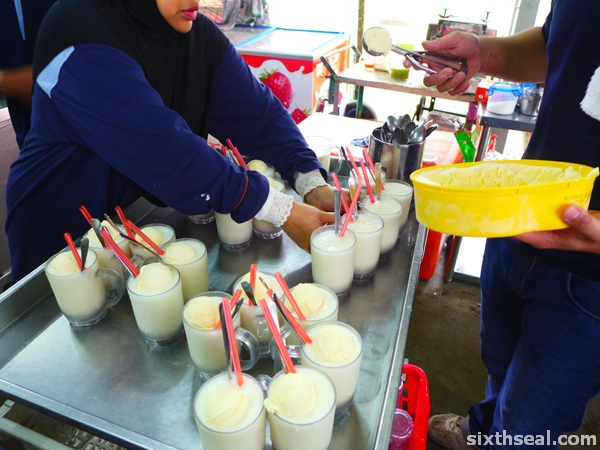 This is a truly remarkable drink – one where people are willing to line up under the hot sun or even in rain for. Klebang Original Coconut Shake is located in Melaka – it’s named after the street it’s on (Jalan Klebang). 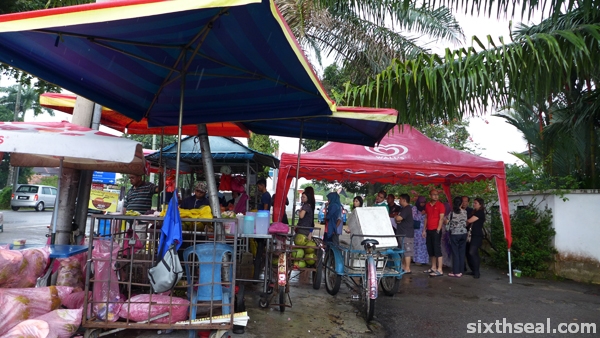 There’s constantly a queue at the small takeaway kiosk whenever we passed it during a road trip yesterday. The kiosk is for takeaways only to free up the main arena for dine-in customers. 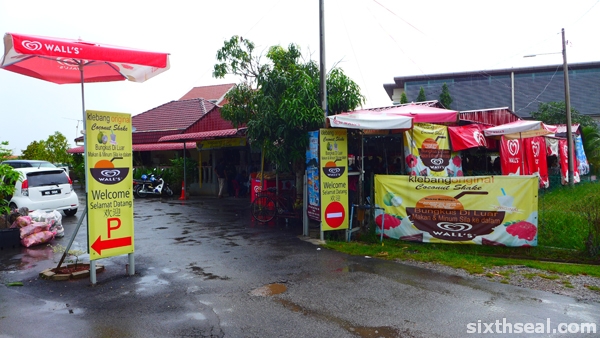 Klebang’s Original Coconut Shake truly deserves the “famous” moniker as the sit-down area is huge, as big as a sports stadium and packed full of people. The car park is equally impressive and despite the constant rain and drizzle, people still come in for a fix. 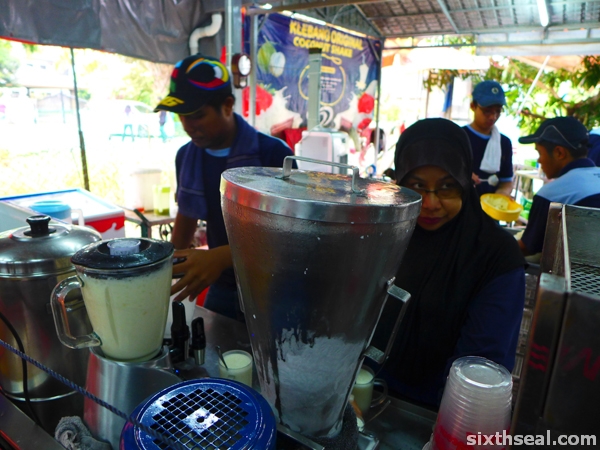 The shake is ingenious – it’s basically an ice blended coconut drink but everything in there is made of coconut. They take coconut water, coconut flesh and ice cubes to blend it all together. 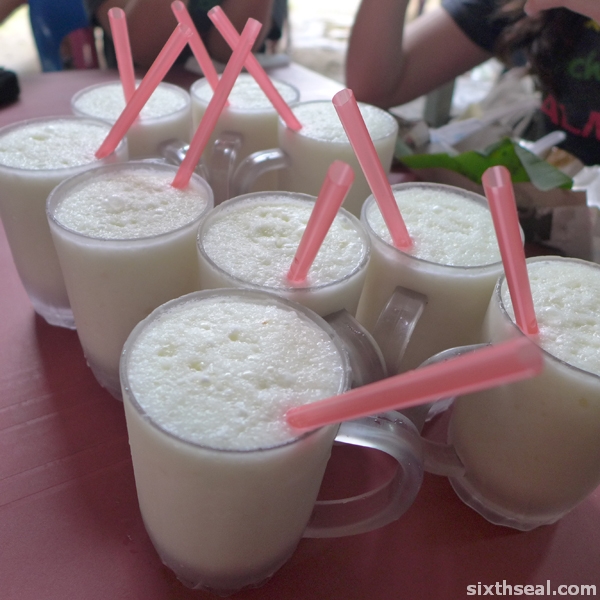 Thus, you’ll taste coconut water and bits of the shredded flesh as well as you go through it with the spoon and straw it’s served in. 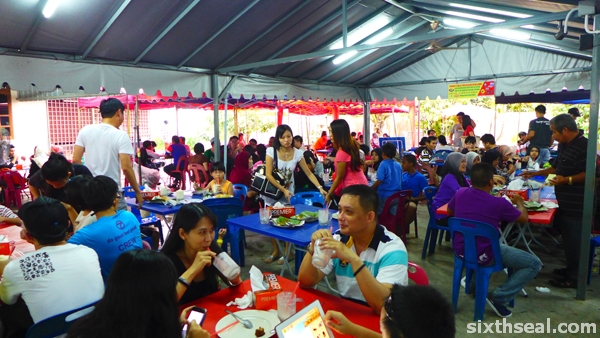 The place does such a brisk business that it’s almost like an assembly line: 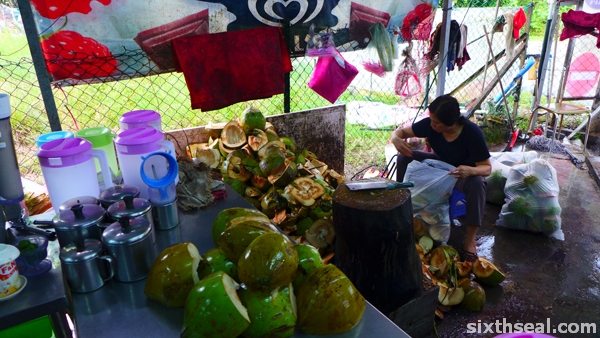 1. There’s a place were the coconuts are opened and prepared – juice/water drained and then the flesh extracted by cutting the coconuts into half 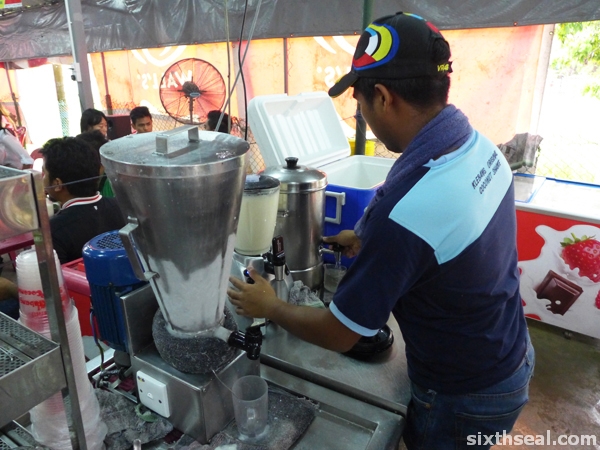 2. The coconut water and flesh goes to the blending station where it’s ice blended with ice and then loaded into a funnel-like device to churn the blend into a waiting chilled glass. 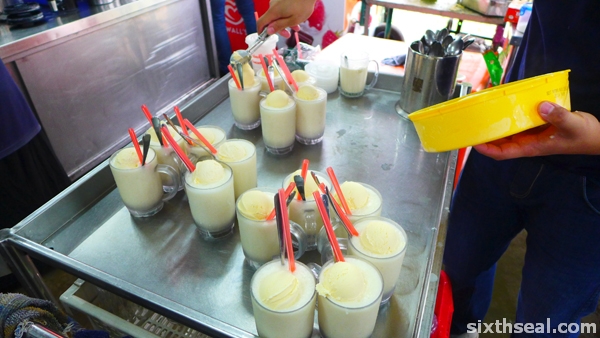 3. The glasses are then sent into the prep station where it’s either sent out as it is or supplemented with a large scoop of vanilla ice cream for the special version. 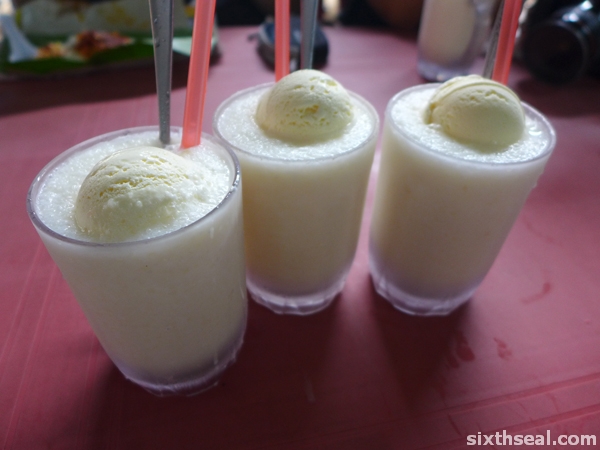 The end result is a delicious coconut shake made almost entirely of coconut and it only costs RM 1.70. The special version with a scoop of vanilla ice cream costs RM 2.20 – 50 cents more and I feel that adds a lot to the taste – imparting a creaminess than one would usually associate with the word “shake”. 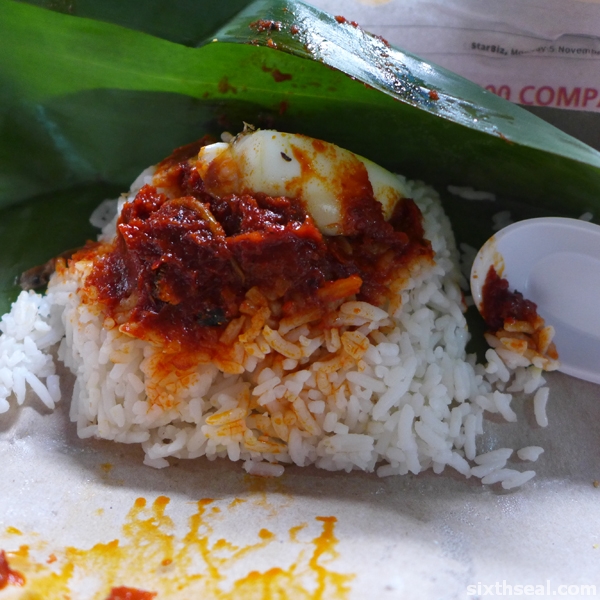 The place is quite well known for it’s nasi lemak too but it didn’t work for me – it has wonderfully spicy sambal which makes my mouth water just thinking about it and it’s warm, but I’ve had better. It’s good for the main coconut shake business though, since you’ll need something to put out the fiery sambal. 😉 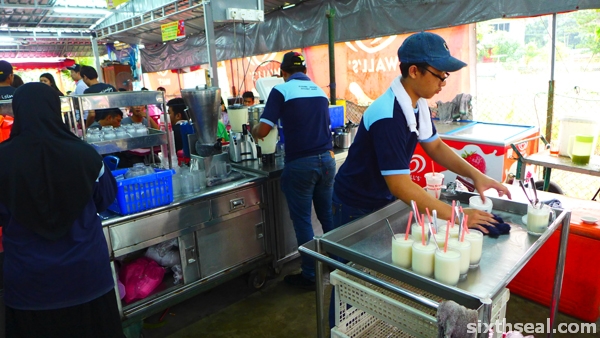 However, the Klebang Original Coconut Shake is a must visit when you’re in Melaka. It has grown a lot since the days and some might say it’s a tad commercialized with menus in three (3) different languages but that still doesn’t change the fact that it’s a great product to begin with. 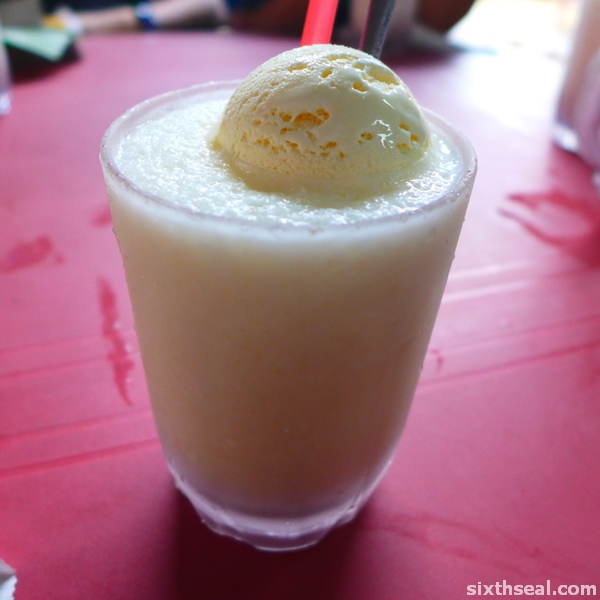 They haven’t slacked off since the last time I came several years ago either – each glass of coconut shake is done to perfection and I love how they use chilled mugs even with the rush of a sudden influx of people (which is why you have to queue in the takeaway section). It’s also affordable (most brewed drinks in KL costs way more than that even in regular diners) which is part of the appeal. 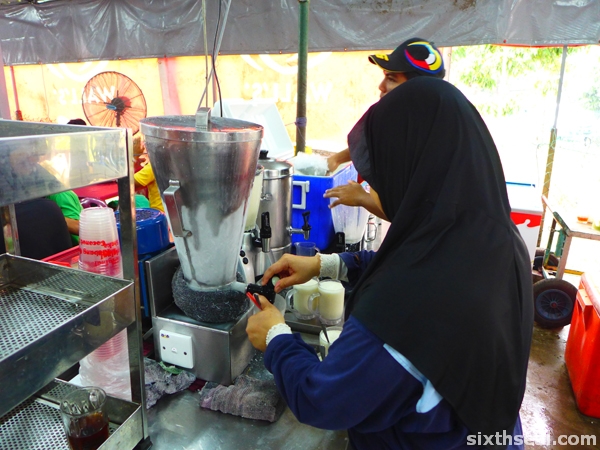 I was transfixed at a man in his twenties taking off his helmet and coming in out of the rain to savor Klebang’s Original Coconut Shake by slowly and tentatively sipping the iced concoction using the spoon. He caught me looking several times and gave me a puzzled look, for me, he symbolizes why this place is so popular. 🙂