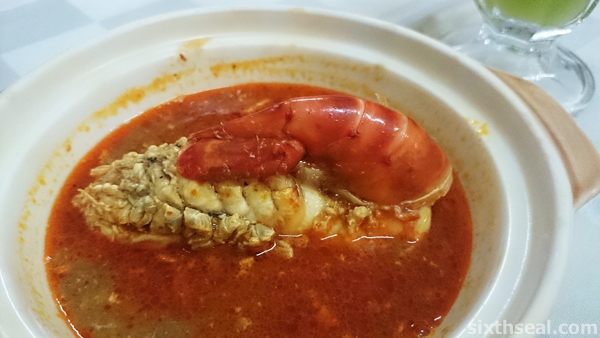 I’ve been craving for umai lately and had the chance to eat it again for dinner with Arthur last night. Fisherman Restaurant is a popular local restaurant to bring visitors coz it has a lot of Melanau native delights like lokan, umai and ikan terubok. These are all Sarawakian dishes – they even have dabai (a local type of olive) when it’s in season. 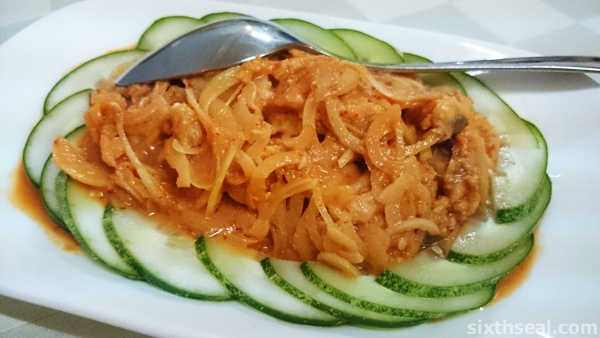 Umai is a local version of ceviche. Fisherman Restaurant does it in a style that’s similar to umai jeb in Mukah. I’ve had it when I went to Mukah in 2008 – it’s very fresh fish (in this case white pomfret or ikan bawal putih) that’s been cured with lime and mixed with chopped onions and chillies. 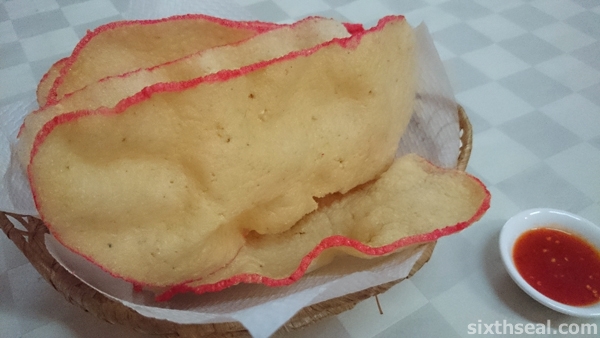 It’s delicious when you eat it with the prawn crackers they serve as an appetizer. 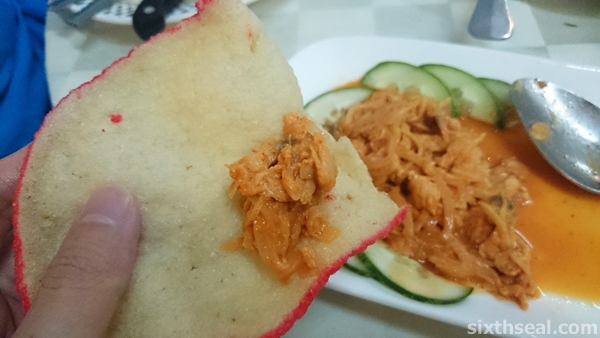 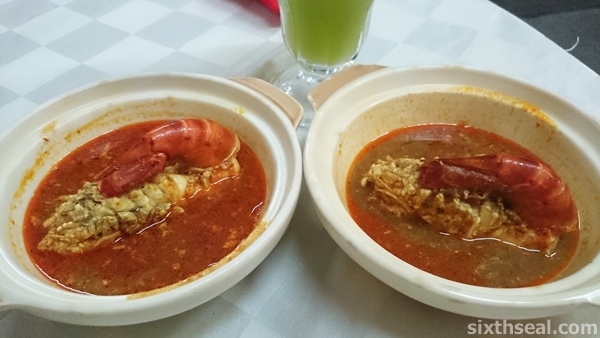 We also ordered an individual serving of large prawn in a mini claypot. These prawns are huge and used in big head prawn noodles. The prawn is cooked in an assam tom yam broth soup and it costs RM 20 per prawn. It’s worth it though coz they do it very well – the broth is flavorful and spicy and the prawn meat is firm and juicy and sweet. 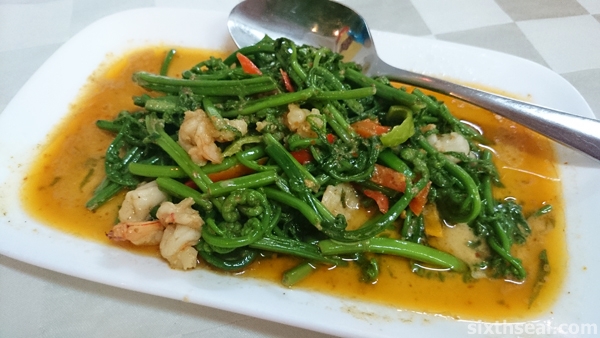 The fibre quota was fulfilled by paku santan. It’s a local fern cooked Melanau style in santan (coconut milk) and shrimp. I really liked this dish too, everything the cook sent out really hit the mark. 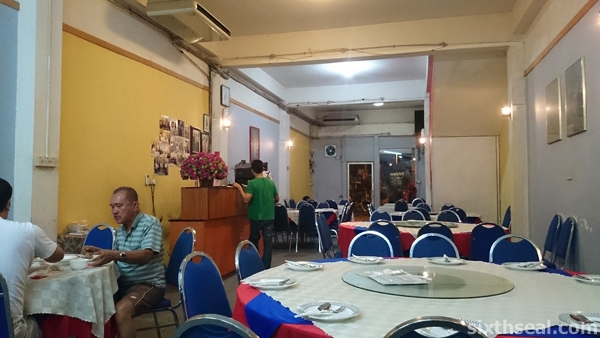 That’s why Fisherman Restaurant is so popular despite being relatively decrepit – peeling paint on the walls, dated single-unit wall air conditioners, and a musty interior. There were a lot of people who came after us coz we went really early – the place was quite full. I do wish that they put some money into renovation though – it looks the same (except a bit more worn) as when I went in 2008! 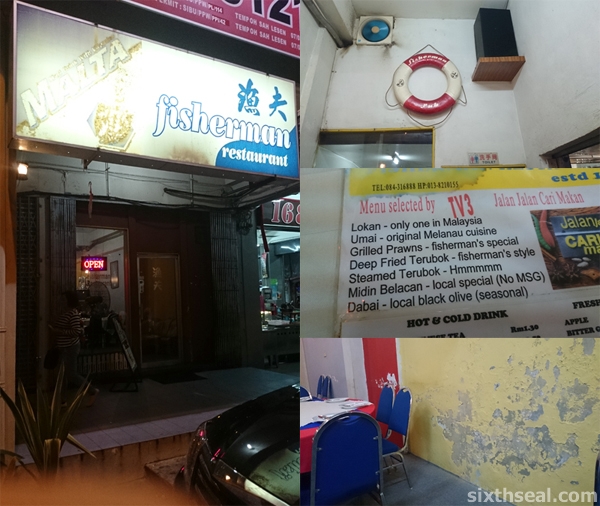 This isn’t even the original restaurant – they were located at a different part of town at first and shifted to this place. 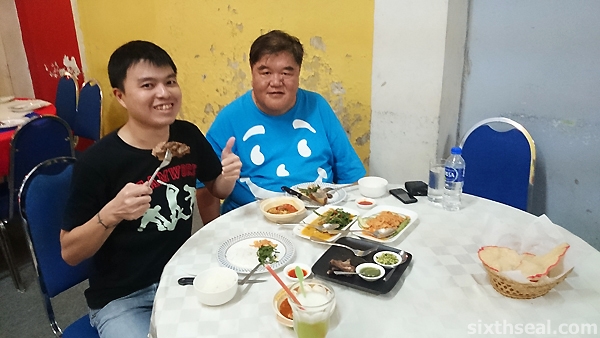 I have to say that the best dish of the night is the roast lamb with mint sauce. This is a newer dish that came to pass with the current generation (the son came back from New Zealand where he had his own restaurant and brought some recipes home) and it’s cooked really well. I have to say that it’s even slightly better than my late mom’s famous lamb (sorry ma). 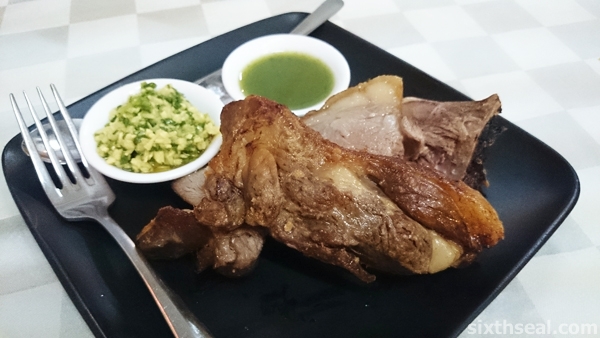 The roast lamb here is sliced generously thick and the meat is juicy. You’ll love this if you’re fond of the slightly gamey taste of lamb, and they don’t overcook it unlike other places. They have two sauces – the mint sauce and a garlic inspired Asian dip, the former is the one you want since the latter is uninspiring. It costs RM 50 for the dish with two large slabs of lamb, definitely a must-order if you visit. 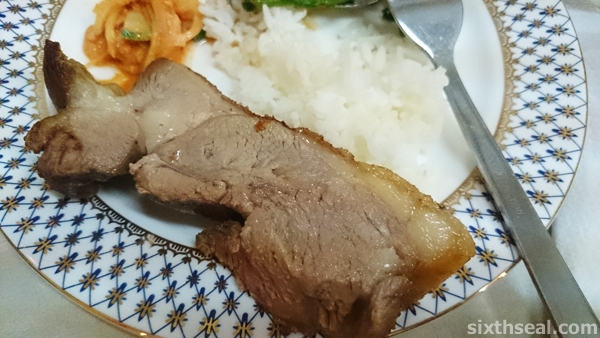 The bill for the two of us came up to RM 126.40 but the roasted lamb (RM 25 per slice) and the tom yam prawns (RM 20 per prawn) accounts for RM 90 so the dishes aren’t really that expensive if you don’t order the premium stuff. Thanks for dinner Arthur! It’s always good to catch up when I’m back home. 🙂

19 thoughts on “Umai and other local delights @ Fisherman Restaurant”