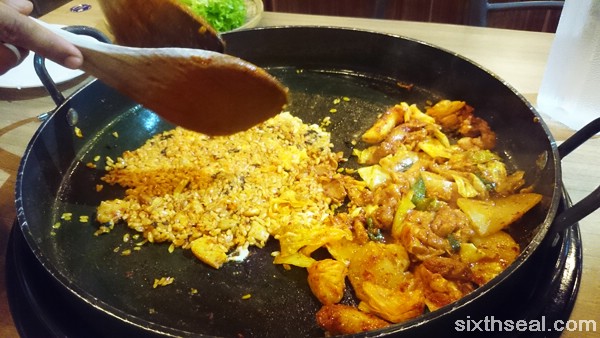 It was just after work and we were at Citta Mall to grab a quick bite to eat. My better half actually wanted to eat something else but I saw an advertisement for this outlet at the escalators and we decided to check it out. 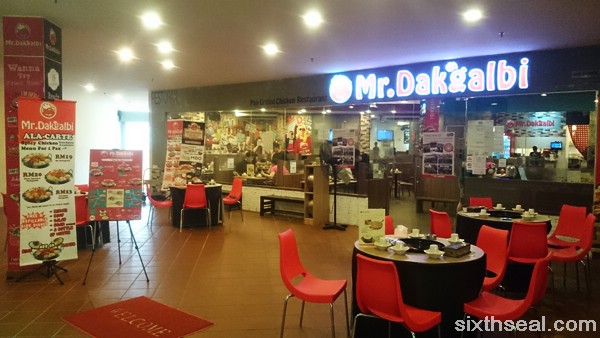 Mr. Dakgalbi is a franchise from Korea with a pretty descriptive name – it tells you what’s on the menu, dak galbi. Dak galbi is a Korean dish from Chuncheon, Korea (just like how okonomiyaki is associated with Osaka, Japan) that involves a hot plate and chicken. 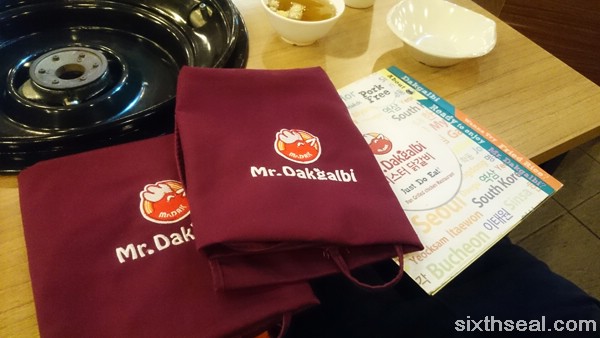 The process of ordering at Mr. Dakgalbi is pretty simple: 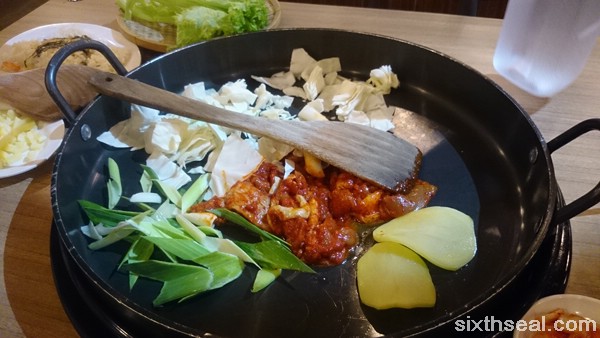 I went for chicken since dak galbi is traditionally made with chicken. The Mr.Dakgalbi (RM 19) option is their flagship – chicken marinated in traditional Korean chilli paste, potatoes, onions, spring onions and tteok (rice cake). It’s a very common Korean ingredient, I’ve had tteokbokki while in Pusan. 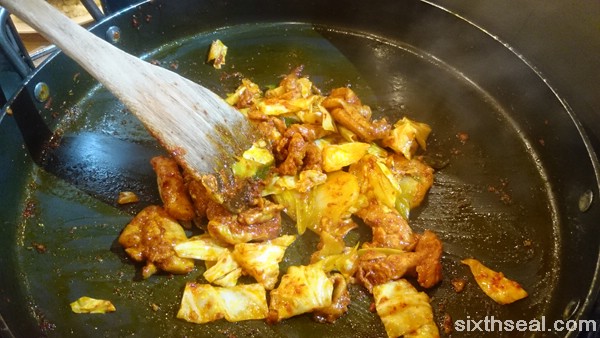 The chicken marinated in gochujang is then sliced into small pieces and fried together with the accoutrements. You don’t have to do it yourself – the staff will cook everything for you, much like Palsaik. It seems like full service Korean restaurants is very big here. 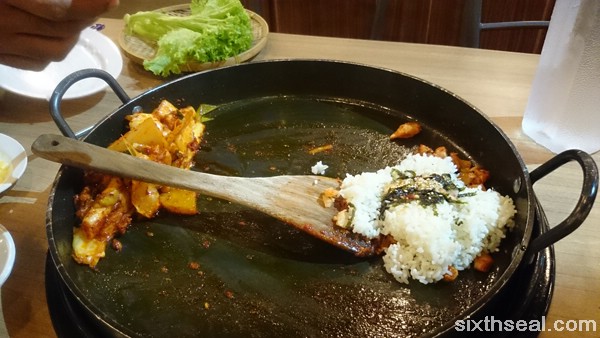 Next up, is choosing the carbs. I asked for rice (RM 6) and cheese (RM 6). You can also ask for ramen (RM 6) if you like. This is fried together with your chicken and then the entire thing is ready to eat! 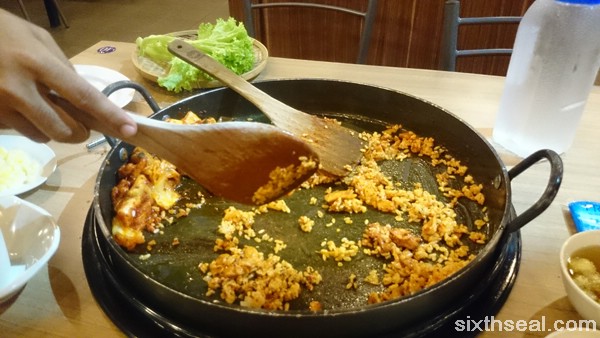 The staff will also portion your chicken into two portions just in case you want to add on, and if you don’t, your leftover rice will be made into a sort of pizza. It eats like the bottom of claypot chicken rice – the caramelized and crispy bottom is nice. 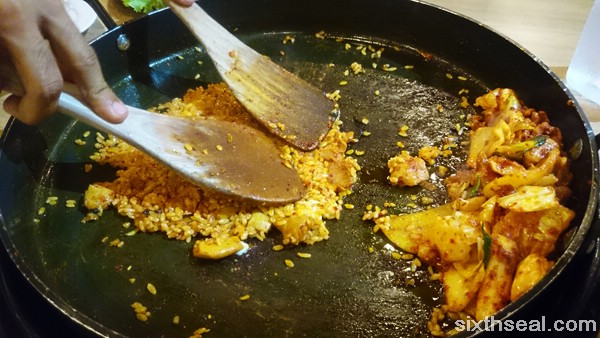 It’s pretty decent but if you don’t like gochujang or have small kids, you might want to order something else since the signature fermented Korean chilli paste can be quite spicy for sensitive palates. 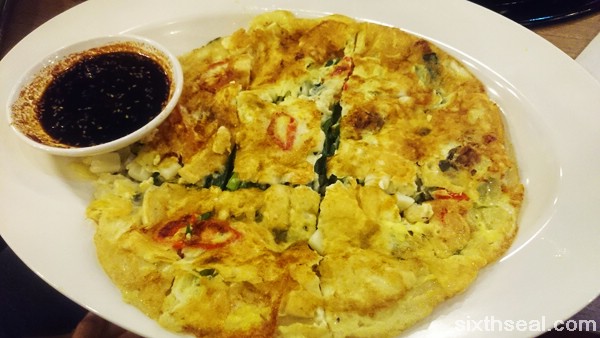 We also ordered Seafood Jeon (RM 19) – a crispy Korean style pancake. It looks nothing like what the menu promised (the picture in the menu had large octopus tentacles practically burying the jeon) and it tasted about as appealing as it looked. Dismal. 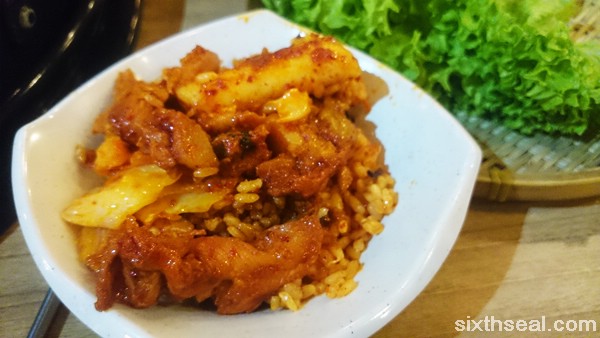 I guess we should have stuck to ordering the namesake from Mr. Dakgalbi. Their dak galbi is alright and it can feed two people easily. You can also add rice, cheese or ramen as much as you want at a price of RM 6 per portion/plate. Thus, our dak galbi is actually RM 30 (RM 19 chicken + RM 6 rice + RM 6 cheese). 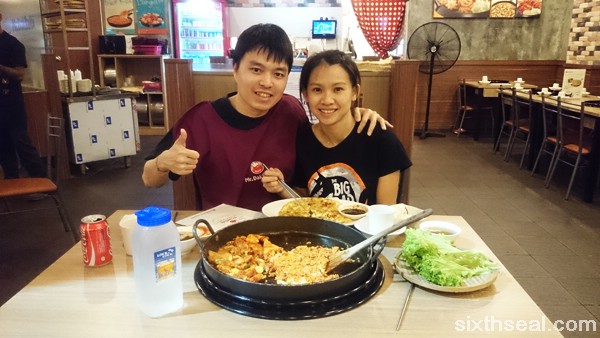 It’s not good enough to make me want to make another trip back soon and their menu is pretty one dimensional. However, I’ll drop by if I have a dak galbi craving (or have an urge to dress up in aprons) since it’s quite close to us. The Mr. Dakgalbi restaurant in Citta Mall is very empty though – it was just the two of us inside before another couple walked in.