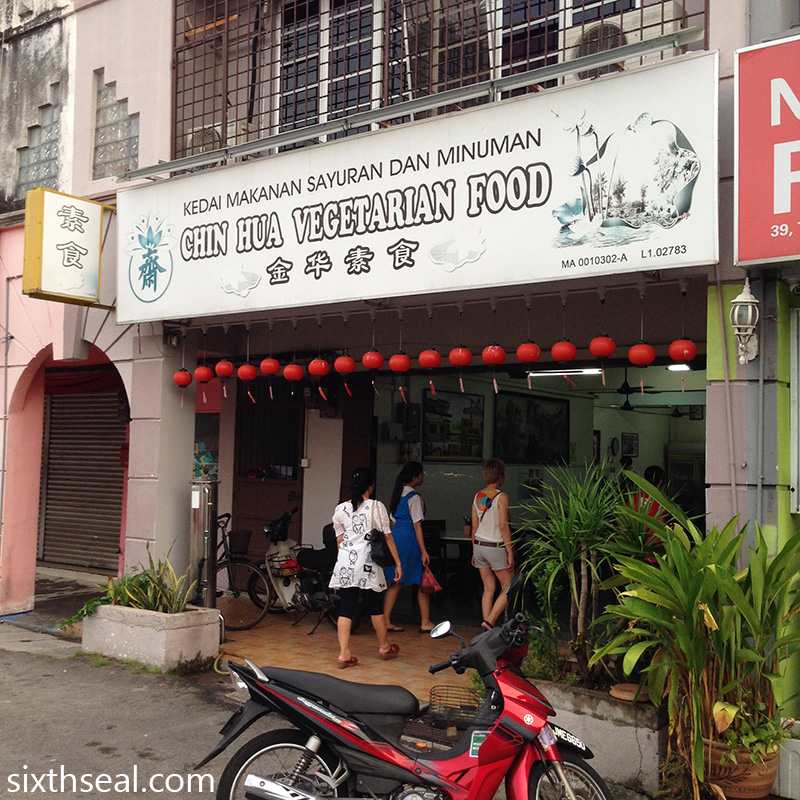 I was in Melaka for a durian trip with Lindsay over the weekend. She’s a vegan (no dairy, no eggs, no animal byproducts) so we went to Chin Hua Vegetarian Food for dinner. I think this is only the second or third time in my entire life that I’ve gone into a vegetarian restaurant. It’s not high on my list of preferences since I eat just about anything, including exotic animals like dog, snake and rat. I have no religious or social taboos against any type of meat. I just don’t discriminate like that. 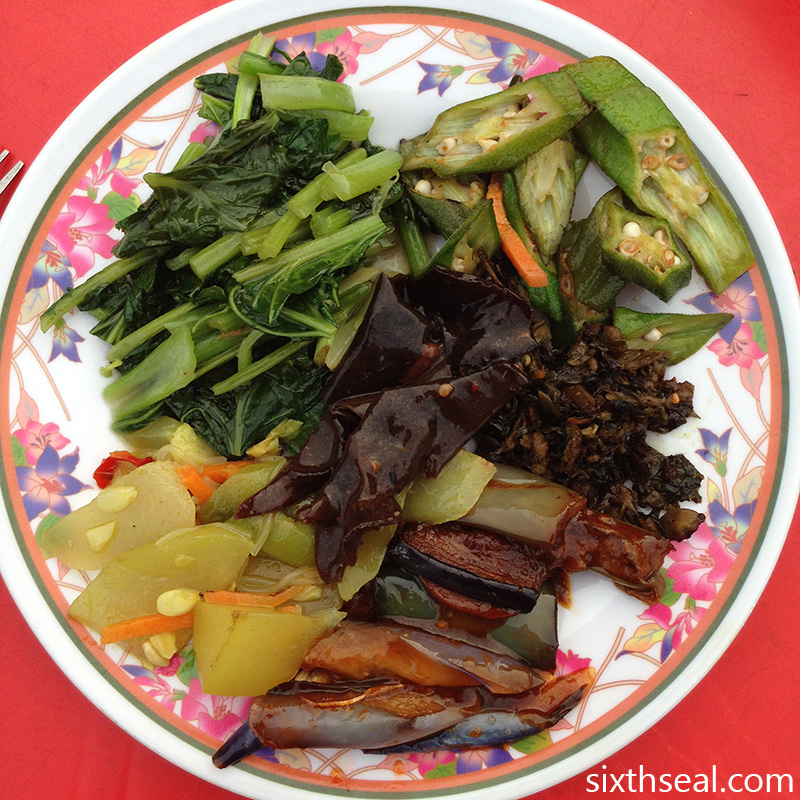 The woman manning the place looks Thai but she speaks fluent Mandarin. They have a rather popular chap fan service. I saw quite a few people eating here, including a large family. Lindsay chose six items for RM 6 from the warmers and I tried some of them. I thought the fungus was quite decent. It doesn’t taste bad at all but I feel like they use a lot of seasoning, oil and salt to boost the taste profiles. 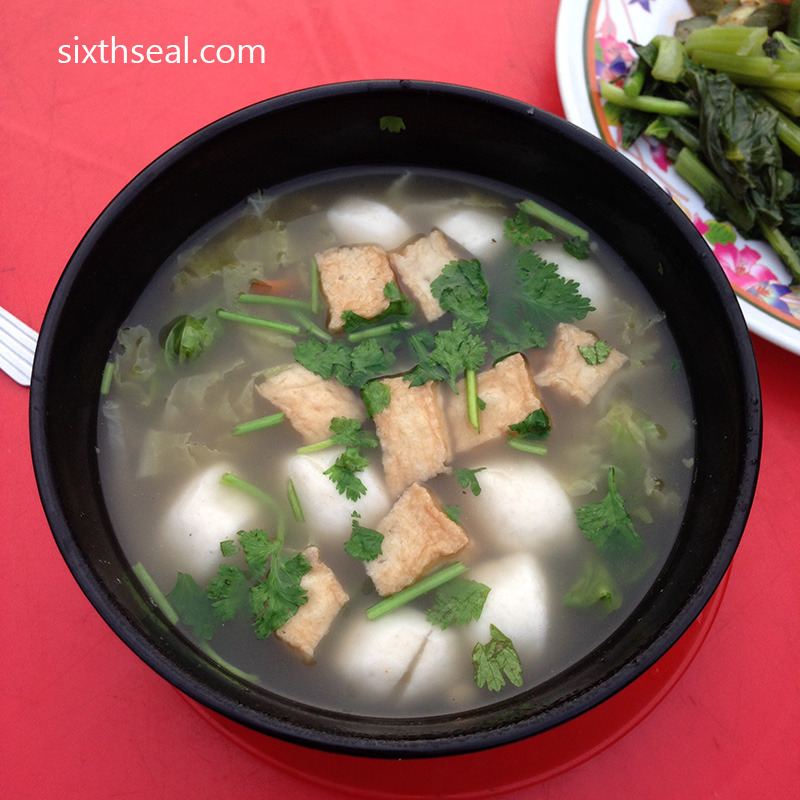 This is the Vegetarian Water Chestnut Ball (RM 5). It’s made to order and you can either choose to have it fried or boiled. This is the latter – it’s actually meant to be an analog of the ubiquitous fishball soup. The water chestnut balls have a springy and yielding texture like a fish ball and the soup is flavored the same way. I would never have guessed that this was made with water chestnuts. It’s remarkable! It really eats like fishballs. 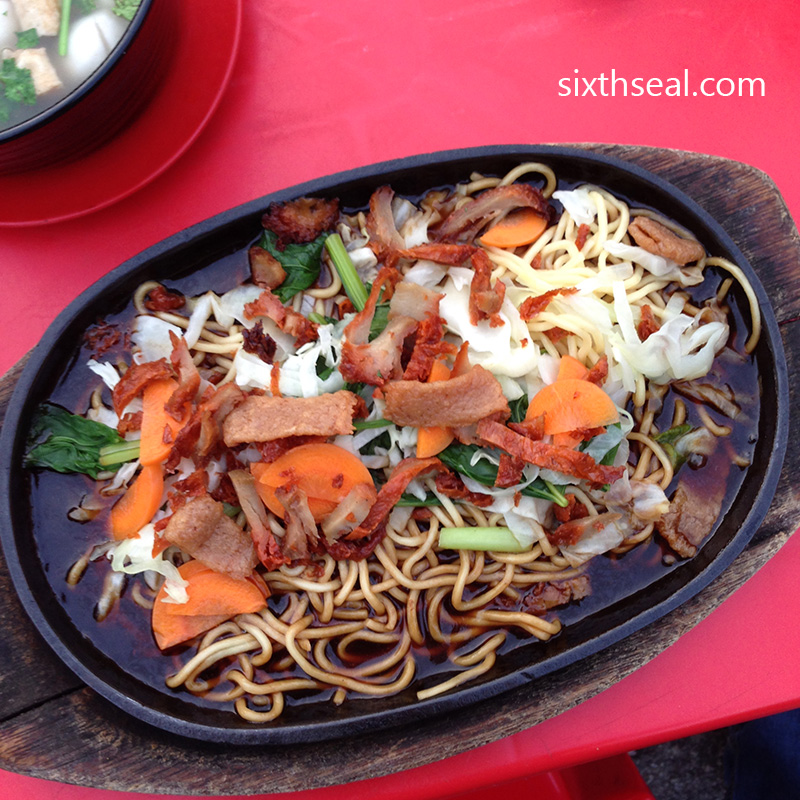 I had the Sizzling Mee (RM 5) which came with generous portions of vegetables. The meat is replaced with mock meat (either gluten/seitan or soy) in a variety of textures. It was alright. The noodles are perfectly edible, just not downright delicious. I feel like this is one of the problems with vegetarian food, together with over-seasoning to replicate meat or enhance neutral flavor profiles. 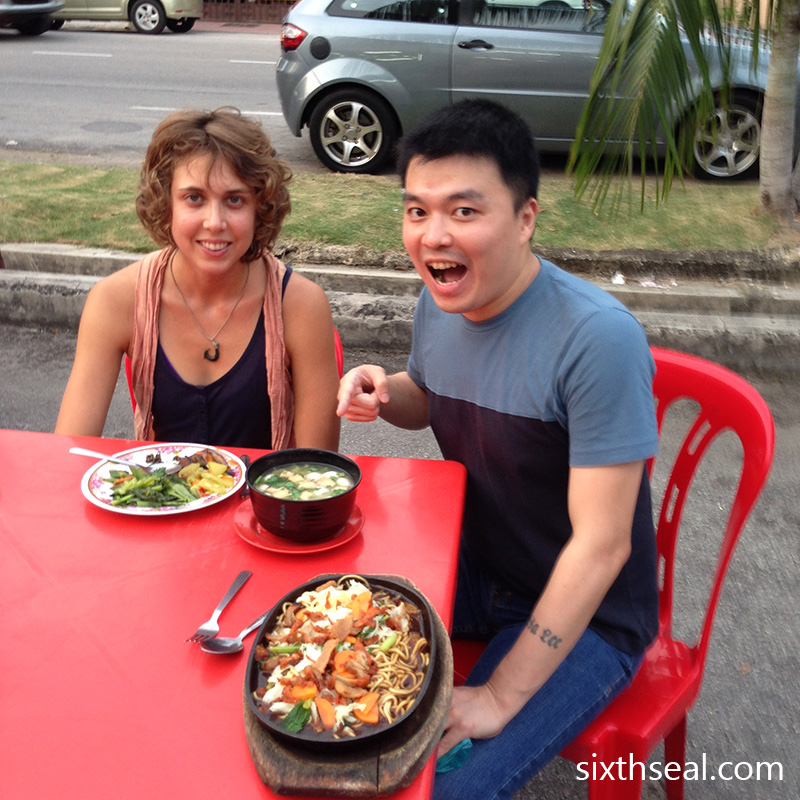 It was a great experience though. The meal just cost RM 16 for two and I wouldn’t have stepped foot into a vegetarian or vegan place otherwise. My parents don’t do the vegetarian cuisine during CNY thing coz they’re Christians so I have limited exposure to such food. I would eat it again but not by myself. I’ll be perfectly happy to go with a vegetarian or vegan though. That’s about the best thing I can say about vegetarian food. Haha. 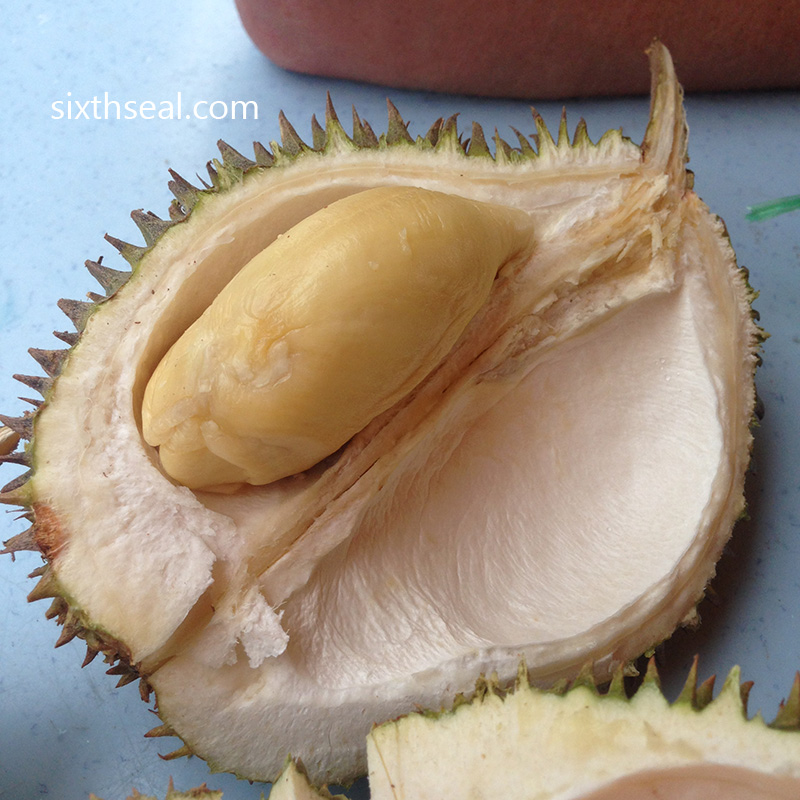 I’ve never even heard of a Margarine Durian before so I was very intrigued when Lindsay told me about it. I thought it was a derivative of the Butter Durian or Susu Durian from Penang. She came down to KL just now and we headed to Say Heng to check out the Durian Margarine. 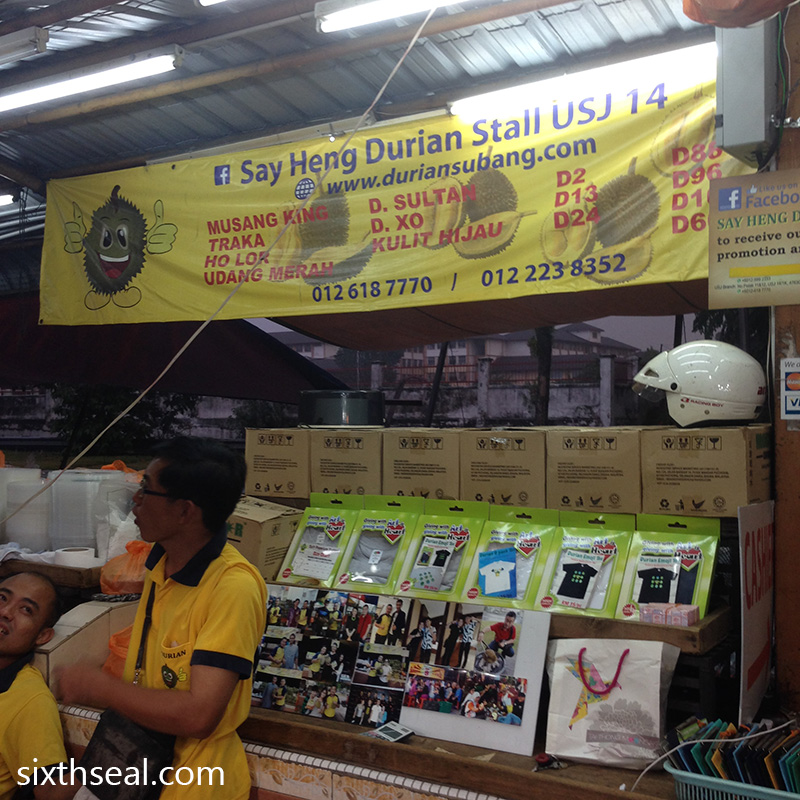 It was raining very heavily and we were sitting under a tarp beside the highway to try this. 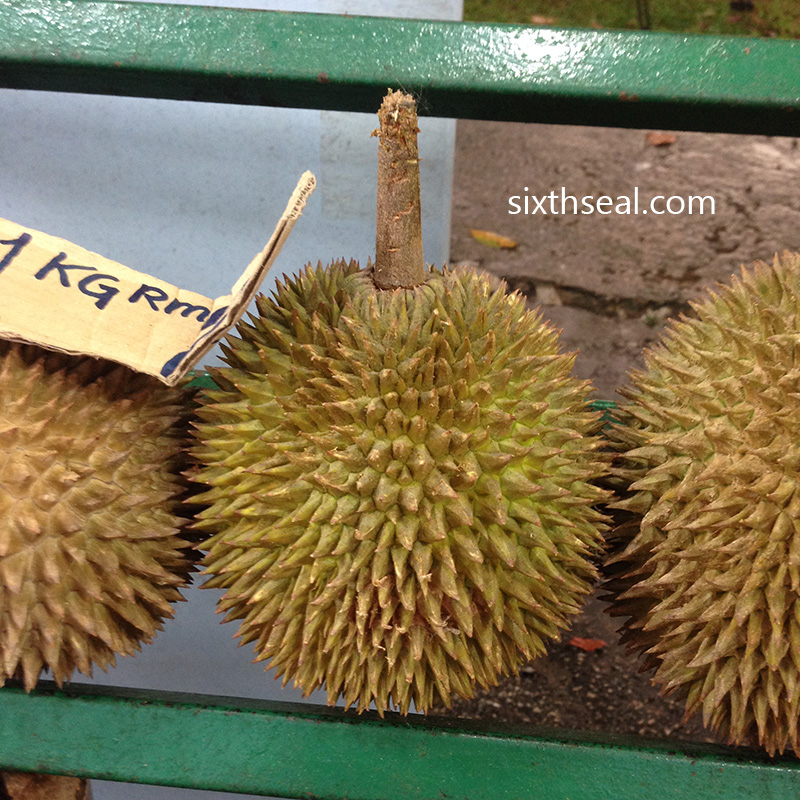 The Margarine Durian went for RM 25 per kg. It has a thin stalk and rather slim spikes. 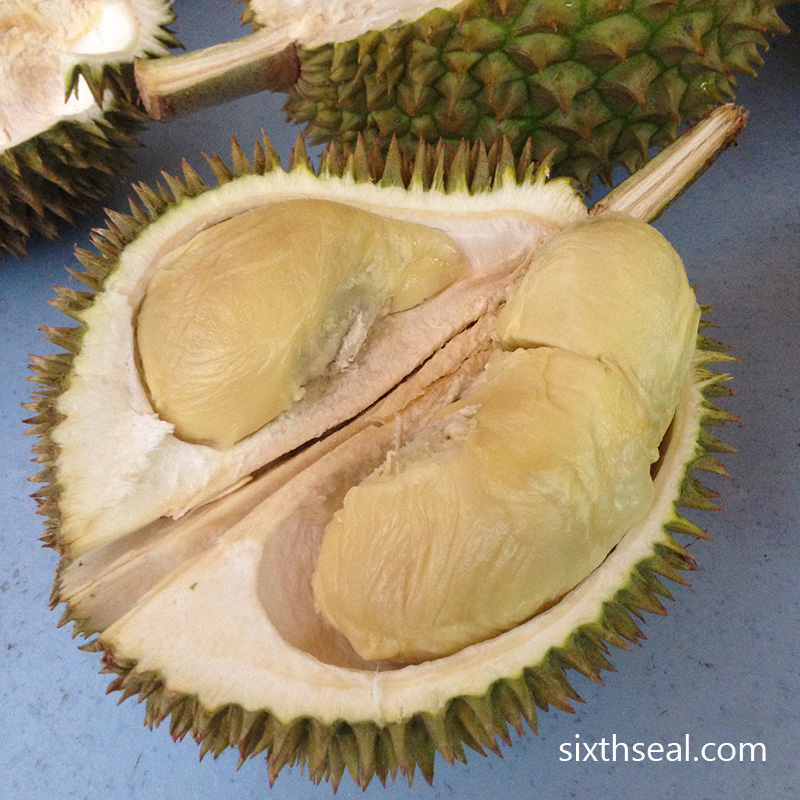 The flesh looks really good too. We got a couple of these, one of them was 0.7 kg and the other 1 kg so they’re quite small specimens. 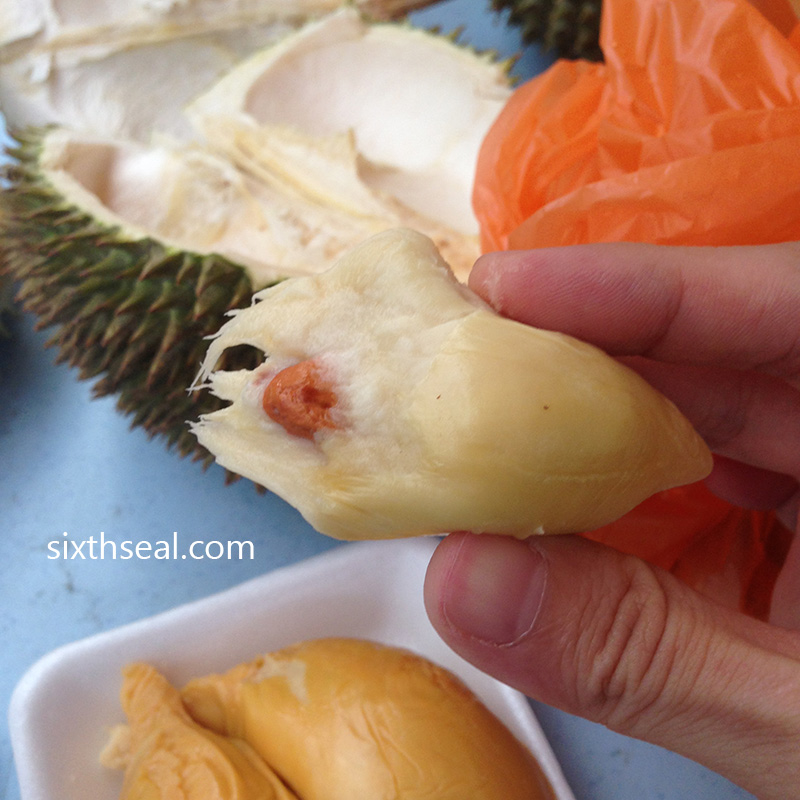 I liked the taste but it was completely overshadowed by: 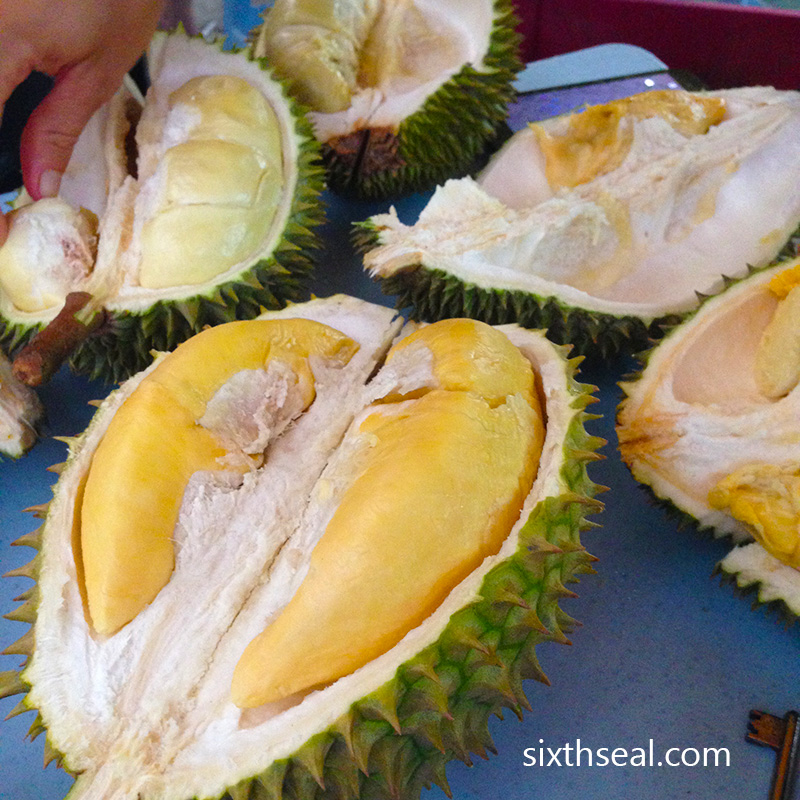 This D88 which Lindsay brought from Bentong! It was amazingly complex – very bitter and sweet, lots of stuff happening on your palate. I love rich and bitter durians like this. It’s perfection. 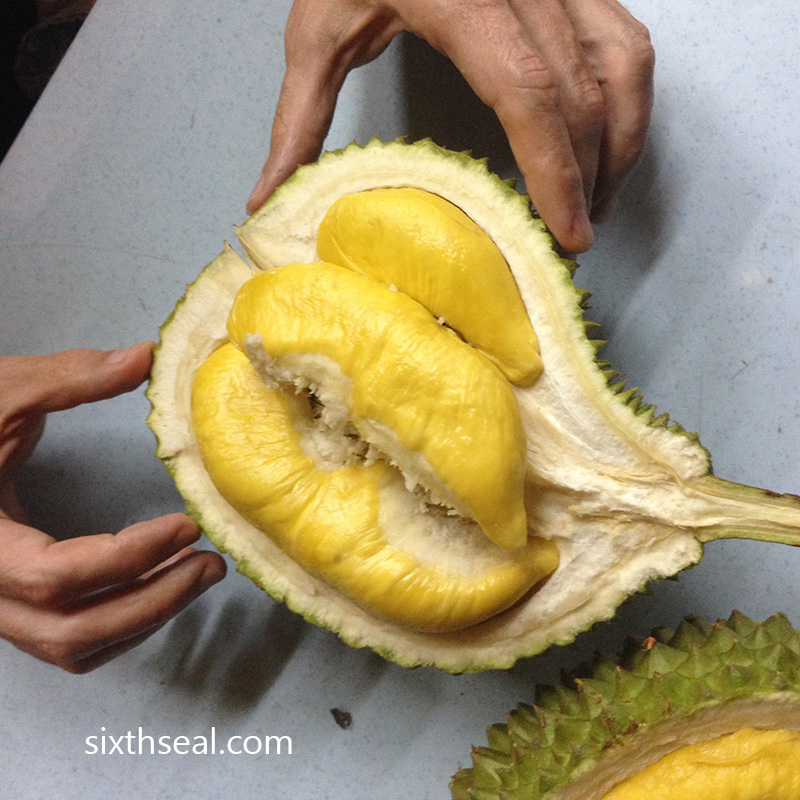 They also had a very young Musang King. It looks really nice but the taste is a little one dimensional. It’s cloyingly sweet and I would have loved it if I had eaten it as the first durian, or if I wasn’t so full. I had a bit of trouble finishing it but when I think about it now, it’s actually not too bad. 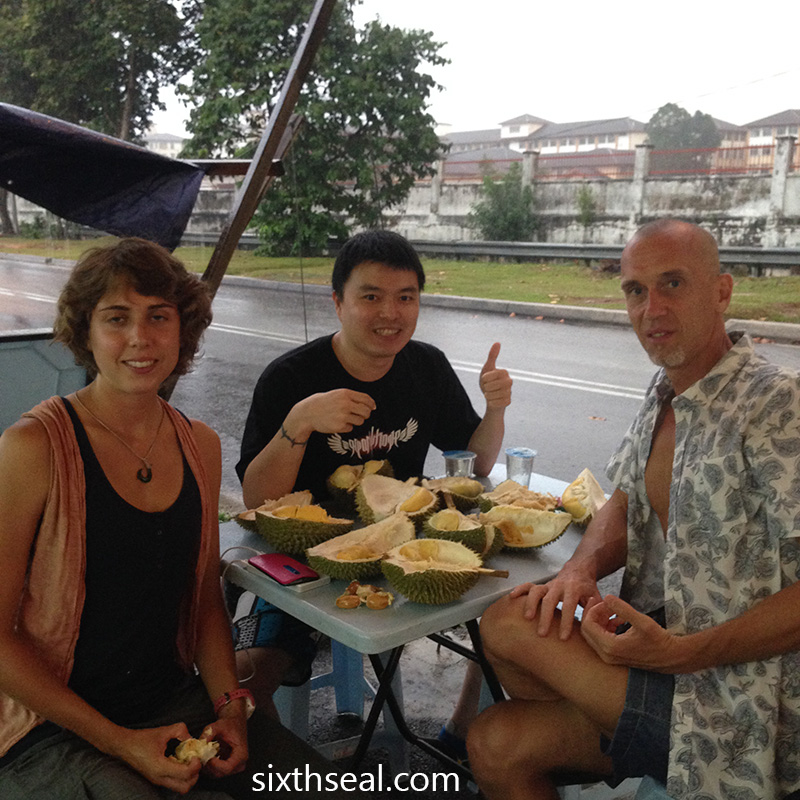 Lindsay and Sasha (it’s a Russian abbreviation of Alexander, as I found out) came with loads of durians. They’re both vegan so this is all they eat. I joined them and ate it for dinner too, although I was slightly sick from so much durians at the end. Haha. They brought along heaps of durians in their car and she bought some at the stall too. It was good to catch up though and I really like eating durians so it’s all good. Thanks for all the durians Lindsay! 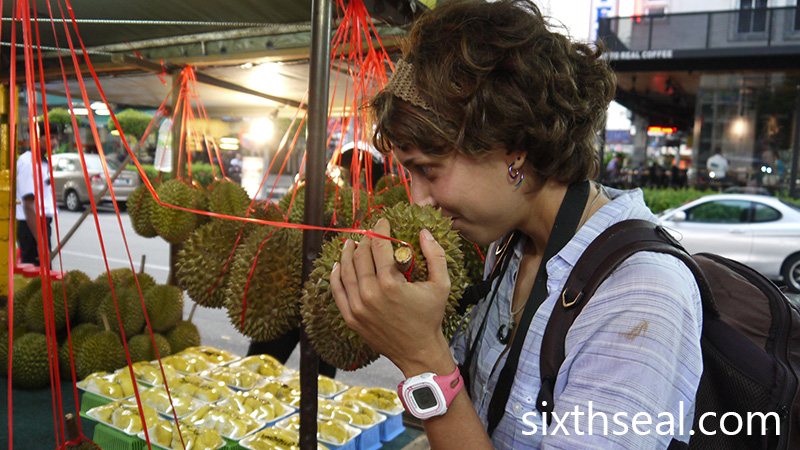 Lindsay is back in Malaysia! Well, at least she was yesterday, she’s since flown off to Bangkok for more durian adventures. I picked her up for some durian late afternoon and we headed down to Sri Hartamas to check out a stall that has been around for over a decade. We saw some durians for sale at another stall before this but they weren’t really good so we moved on. 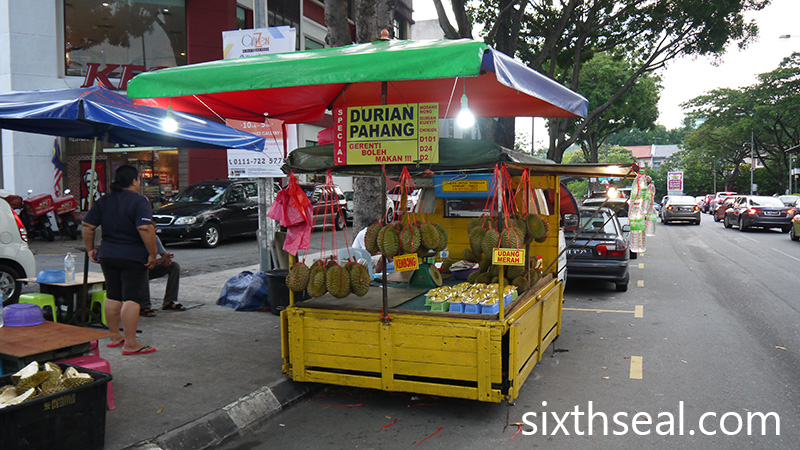 This one only had two types of durians – Durian Kembong and Udang Merah (Red Prawn/Ang Heh). 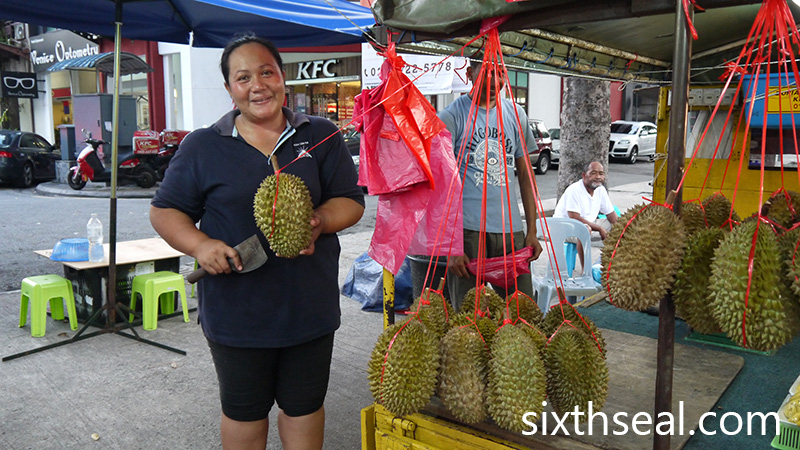 Lindsay chose the durians – she’s way better in these things, having volunteered in durian farms and such. 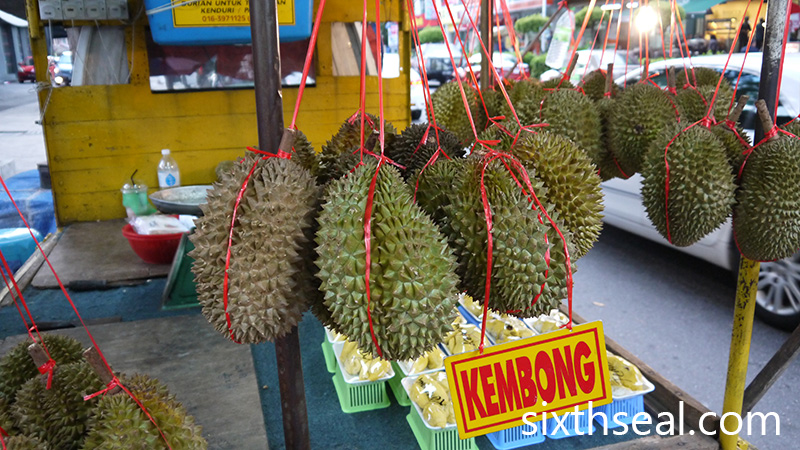 The durians they sell as Durian Kembong (I’ve never heard of the name) is actually D123 Chanee according to Lindsay. I’m not sure if “kembong” (which means inflated) is local slang or some kind of identifier but it’s not in the list of durian clones. 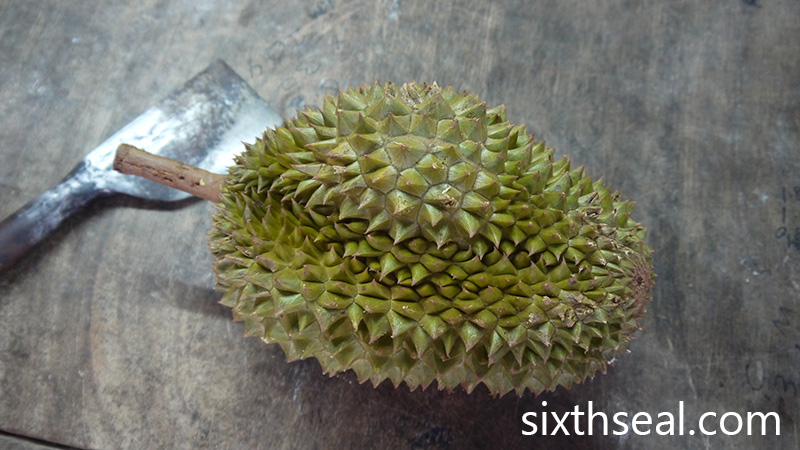 This is a 1.7 kg beauty that Lindsay picked out. It costs RM 25/kg. The durian comes from Gerik in Perak. 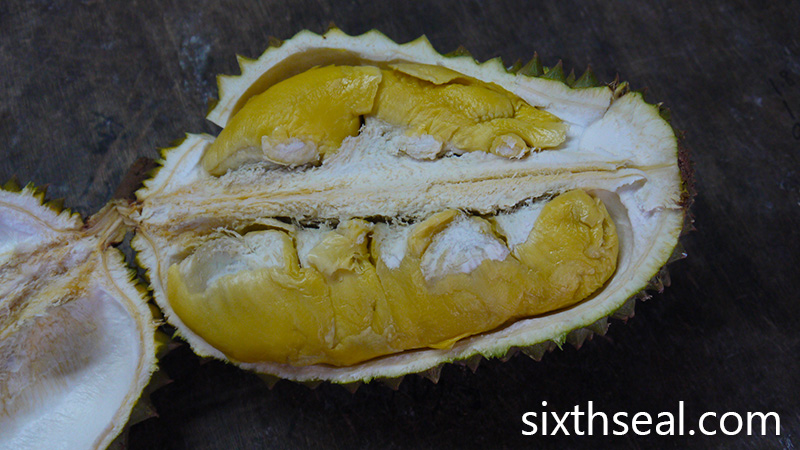 The Durian Kembong flesh is a pleasing saffron color and the seed can be seen “peeking” out, much like a Chanee or Musang King. I thought it tasted quite nice – there was little to no fiber and there is a sheen of slippery flesh on top of the main bulk, which makes eating it a pleasure. 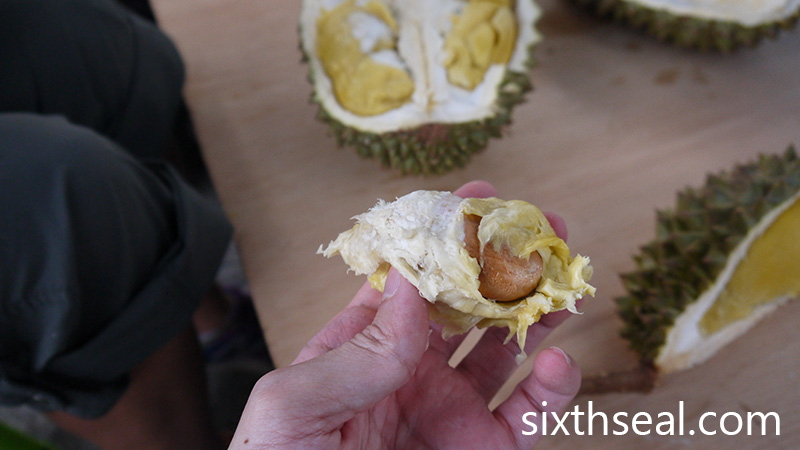 The durian was mostly sweet, with hints of bitterness and overall a decent, if not exceptional, durian. 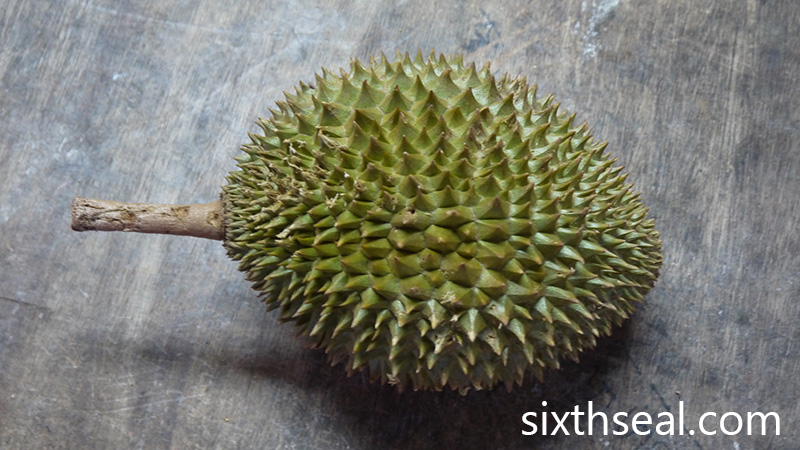 This Udang Merah comes from Gerik, Ipoh instead of Penang. It’s a small 900 gram fruit that was going for RM 28/kg. 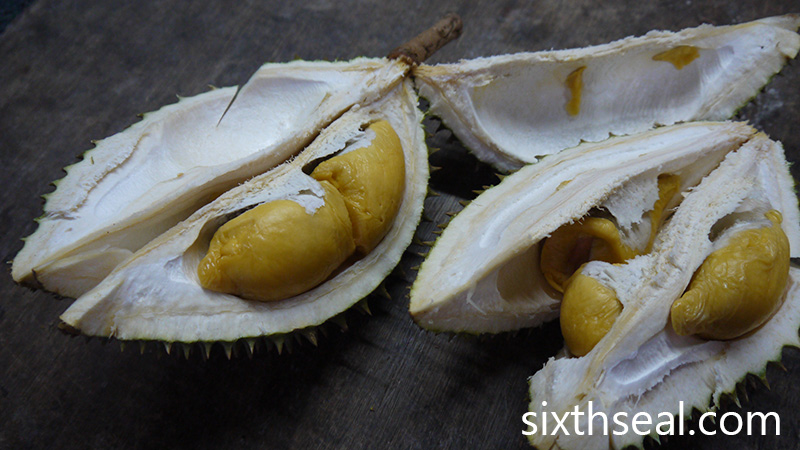 This small durian only has a couple of seeds but it was awesome! The vivid golden bronze flesh looked beautiful and the intense flavor was spot on. I was very pleased with the taste – it was rich, flavorful and strong, everything I look for in a durian. Creamy and succulent, no complains about this one. 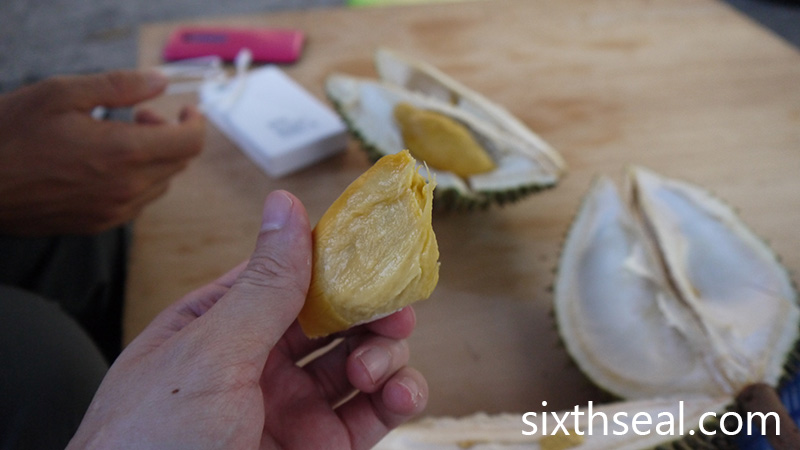 It’s a good thing that we opened this as our second durian and not the first, or the Durian Kembong would have fared poorly in comparison. Haha. The total came up to RM 65. This stall also sells tempoyak (fermented durian paste) made from lower quality durians they couldn’t sell. 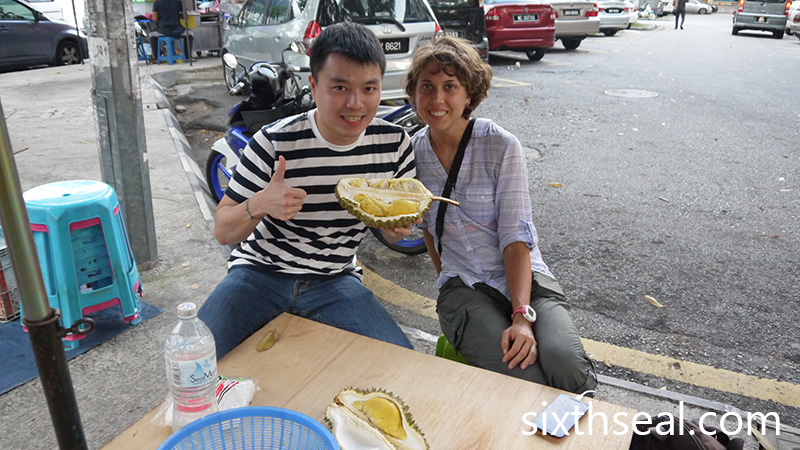 It was good to meet up again Lindsay! I really had fun talking to you. Sorry I had to run off so quickly after the durians. Catch up soon when you’re back! BTW, if you guys are interested in durians, Lindsay is running a durian tour in Bangkok from 25th May to 3rd June. You can surf over to her blog to register – she responds promptly (better than I do with my emails anyway) and the tours are open to all. It’ll be fun if you want to learn more about durians. 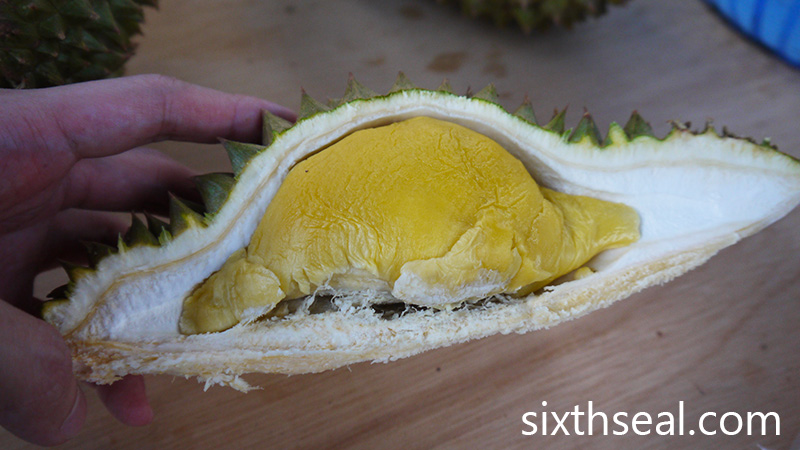 See ya when you’re back and have fun in Thailand! 🙂 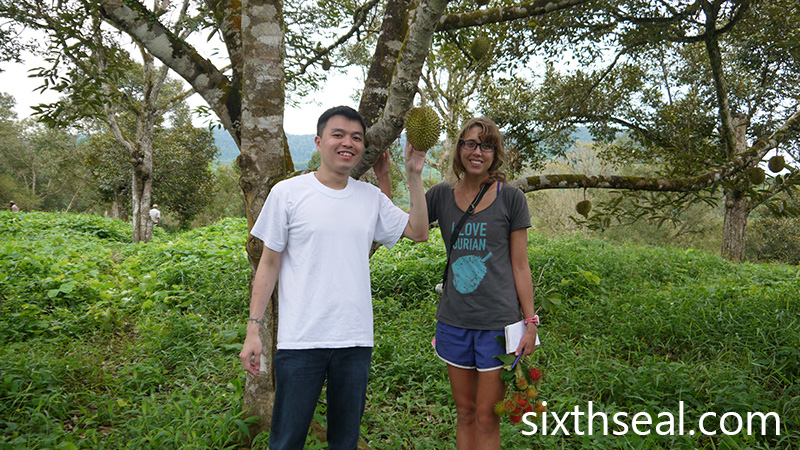 I had so much fun today. I met up with Lindsay (of yearofthedurian.com fame) and we went to two organic durians orchards, where we ate a lot of durians. I even tried a new one today – the D144 Durian (a hybrid of D2 and D24). I have 10 (!!!) durians (mixture of D24 and D88) and 1 cempedak in the boot of my car, courtesy of the kind people at the durian orchards. Lindsay is flying back to Oregon at 2 am so the fruits all went to me.

Funny story: I was in Penang with my better half over the weekend and went to eat some durians. There was a couple who walked past me while I was sitting there enjoying my Susu Durian and I overheard them talking loudly in Hokkien about an ang mo (Caucasian) who knows a lot about durians and blogs about it while they were inspecting the stall. Haha. 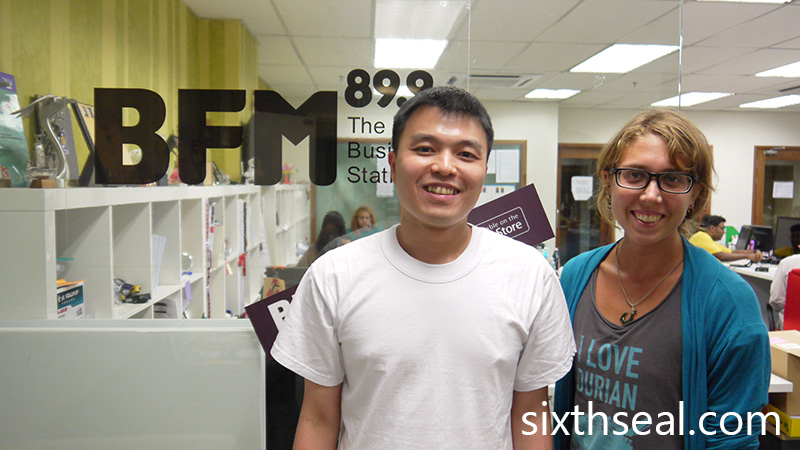 I just came back from sending her to the airport – it’s been quite a long day, I picked her up at 9 am. It was a blast and although we couldn’t visit the third durian orchard that we planned to go to due to time constraints, I actually learned more than a few things about durians today. I also found out that the Bentong/Karak area has a lot of durian stalls by the roadside, all fully stocked in the morning (since the orchards are nearby).

I’ll write more tomorrow, I have to finish some work. We were also on BFM 89.9 just now (the segment isn’t live and wouldn’t be aired yet) to talk about durians. Thanks for organizing everything Lindsay, and for the wheelbarrow lift. 🙂