I made this “live action” music video on Sunday! It’s my first attempt at something like this. The cosplayer’s name is Mindy Mica and she was kind enough to spare some time for this shoot. There was an event at Klang Parade and I noticed Christmas decorations were up so I thought of making a festive themed one. The song is Jingle Bells ga Tomaranai – the new Aqours collaboration song with the School Idol Festival mobile game. There was a snowglobe thing which had air pumped inside to inflate it into a spherical shape at the mall, this was where most of the “snow” scenes were done. You can actually go inside, it’s RM 5 per pax and you can probably fit 3-4 people in there. The rest was filmed around the mall.

This is one of those by-fans-for-fans things, it’s content I like to see as a Love Liver so I thought of producing some to put out there too.

I have been abstaining from eating candy, chocolates and ice cream for weeks. I haven’t even touched added sugars in a long time – it’s always unsweetened coffee or Chinese tea when I eat out. This is an allocated Cheat Meal (TM) for being so good for so long. Haha. There’s toast, waffles, nuts, sauces, chocolate, fruits (strangest addition was grape tomatoes) in a huge platter. I had already eaten one savory meal prior to this (at the start of the video) so it was a challenge trying to finish this with just 2 pax. I think it’s meant for 4-6 people. Still, we tried! Turn on CC for English subtitles!

I thought this was pretty interesting. It’s 1 whole chicken smoked with applewood chips and it tastes pretty good. It takes 20 minutes to arrive coz it’s cooked to order. I had this at the Black Market outlet below my new place. I just moved to Main Place and was searching for something to eat when I saw this. Yeah, I ate 1 whole chicken! It’s not very big though, it’s one of those free range kampung chickens. I’m trying to eat less carbs now so it’s only protein and vegetables.

I was in HCMC this weekend, just went for 3D/2N for some righteous Vietnamese food. I like pho but the thing I crave for the most is bahn mi – I ate it three (3) times during my trip, at 3 different stalls and bakeries! The first one was the best – the bread was crusty, soft, yet fulfilling at the same time. Some places have an overly soft baguette which I don’t personally like – I prefer the bread to have a bit of bite to it. I also had pho, com ga (chicken rice) and Vietnamese coffee! There was an unusual dish consisting of pork blood porridge with random pig organs on the side but I didn’t include it here coz it’s a mukbang – stay tuned, I’m editing it now.

I went to Sarikei (about 1 hour from Sibu) just to eat this Asam Tom Yam Big Prawn Noodles in a Coconut. I always try to go when I’m back. I asked the chef if I could film him cooking and he was kind enough to say yes. He even cleaned up his workstation! Thanks Chef Huang! He’s been doing this for 16 years too.

I think this is the best video I’ve done thus far – took me two days (not continuously of course) to edit, while I usually just stitch and cut in a few hours in Premiere CC. I also added a few new effects and some music, although the music seems a little hyper for driving. It’s my workout tunes, I’ve been listening to it while torturing myself every day so I got quite attached to the song.

Turn on CC for English subs, the video is in Mandarin.

Yeah, I tried to eat the entire menu of Aloha Cafe’s Sarawak laksa. It’s probably the best in Sibu – or at least I haven’t found a better one yet. There is the Small (RM 5), the Big with Large Prawns (RM 7), and the Big with Huge Prawns (RM 10). The last two is the same size, only the shrimp is bigger for the latter. I had a guest this time, who ate one bowl. Someone asked me why my teeth look like that in Facebook – those are actually made so my Invisalign aligners has something to hold on to and push my teeth straight. Speaking of which, I need to drop by Imperial Dental Bangsar for my next set when I’m back in KL. I’m still wearing them, but obviously I take them off to eat meals. That’s one of the best things about Invisalign, the fact that you can take them off.

I’m going to Sarikei tomorrow to do one on Glory Cafe’s Tom Yam Big Prawn Noodles in a Coconut. I’m just going to eat one though so it’ll be more like a normal mukbang instead of an eating challenge. I don’t think it’ll be nice to try to eat large amounts coz it takes so long to get through the large prawn that it’ll take ages to eat 2-3. It’s also a soup dish so the same noodle expanding problem might come into play. I already have a vision of how I’m going to do the video, so let’s hope it turns out the way I imagined it. I like doing this, I think I’m getting better each time. 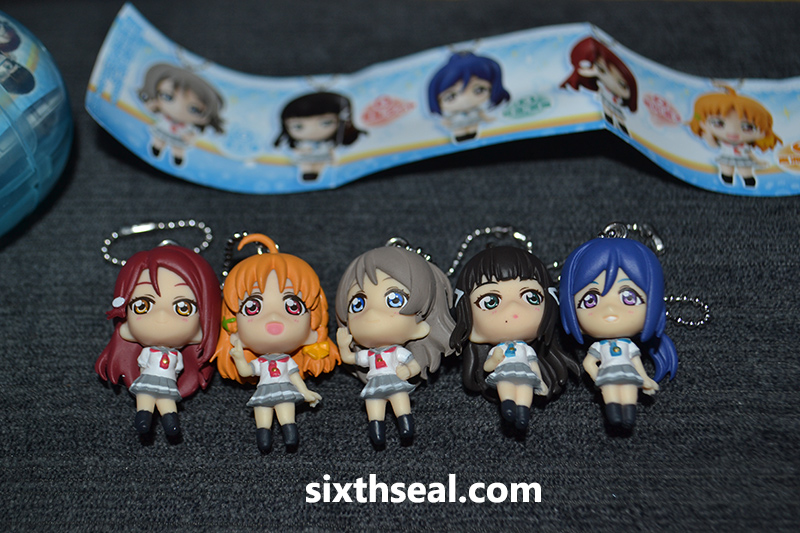 Yeah, I was pretty surprised to hear about it too. It was posted by a fellow Love Liver earlier today so I immediately drove down to Avenue K to check it out. I later found out that the gashapon machines were brought in by Shojikiya. It’s one of those dangly things which you can hang on stuff – the available characters are Chika, You, Riko, Dia and Kanan. Each roll is RM 15 (RM 5 tokens x 3) – if you’re not familiar with gashapon machines, they are novelties or collectibles stored in a plastic “egg” which is then cranked out of a machine. What comes out is random, you can’t choose the one you want, so it adds an element of chance (and gets collectors to spend more).

I wanted to get 1 of each girl but my limit was RM 150, which gives me 10 attempts. I did manage to get one of each but it took me till the 9th try (RM 135) to get Riko. I also had a brain fart and kept on referring to her as Ruby in the video. To be fair, she has a similar hair color but as a Love Live fan, I shouldn’t have made the mistake in the first place. Oh well. It did give me a chance to try out moving text though. I want to challenge myself to add a new effect that I learned into each video or make it better somehow. I’ve also been trying to add a lot of energy but I think this is a bit too much. Haha.

I was actually quite hyped up and on a lot of caffeine since I was about to start my daily torture exercise regime before I rushed down for this. 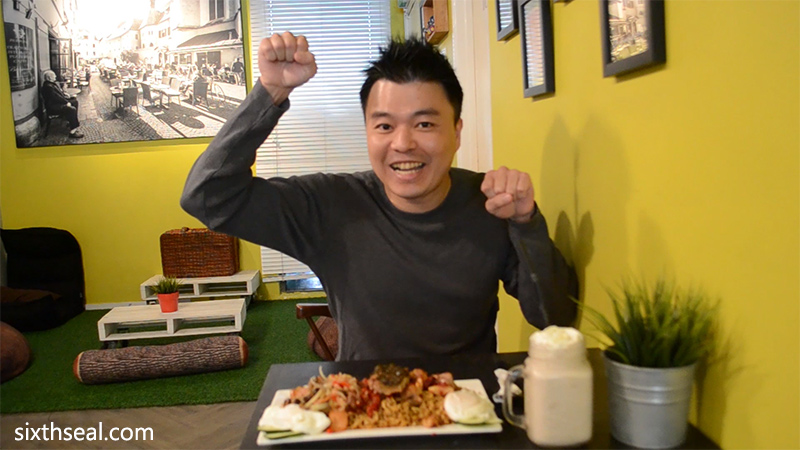 I’ve been following this online – it’s a very fun concept where a 3 local personalities (Awal Ashaari, Scha Alyahya and Faizal Ismail) and our very own blogger Hanis Zalikha goes on a roadtrip where they complete challenges across the nation.

Now that they’ve move on to the second phase, you can watch video snippets like the one above from each of the 4 teams. It’s quite entertaining to see a reality show online which combines videos from YouTube, photo galleries in Facebook and various tweets from Twitter to form a cohesive whole.

Each team is sent on a roadtrip to a location in Malaysia, where they complete challenges which can only be done with the help of the public. That’s done in a large part via social media – when the teams gets the challenges, they send out word through their social media assets to their fans and supporters to chip in and help out.

The interesting part about this is that you get a large part in determining who wins. It’s like a reality show where you’re the judge. 🙂

The videos from each of the 4 teams are posted online and the winning team will be the one with the highest number of collective video views.

I found myself using a lot of bandwidth to watch the show. It’s a bit of a cross between a locally produced travel reality show and a competition reality show (like Supermarket Sweep from my youth – remember that?).

You can watch all the videos at the PETRONAS Switch 4 XTRA Road Challenge YouTube page.

I’m going to support Team Hanis Zalikha coz I like her on-screen personality – it’s pretty much the same as her real persona. Which team do you support? 😀

…kueh (local pastries) for a stall!

It’s quite entertaining really, after all the locally produced travel shows I’ve been watching on TV. Go check it out, particularly if you’re studying overseas and missing a bit of home. I wish stuff like this was available when I was studying in Melbourne. 🙂