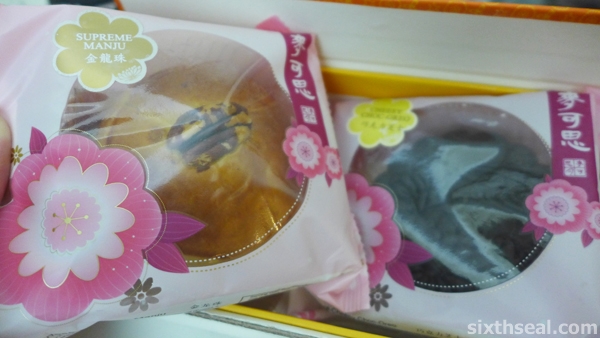 Yup, it’s the annual Mid-Autumn Mooncake Roundup! Oh wait, I don’t think I ever had one. Haha! I believe one of my first mooncake posts was in 2004 – a review on a rather nice licensed S.H.E. limited edition mooncake set. I’ve also made my own mooncakes before.

There’s three batches of mooncakes I got from 3 different manufacturers this year – most of them *new flavors* for 2013: 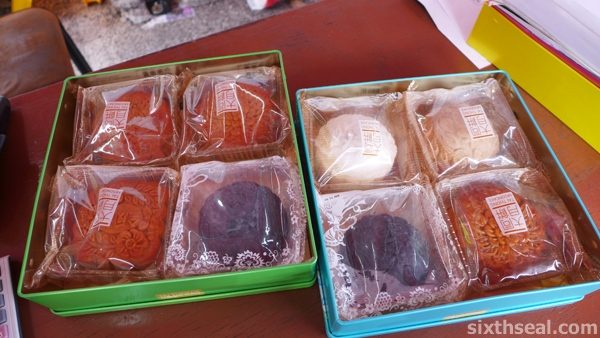 This is the first mooncake I ate this year. My girlfriend bought it and gave to me coz she knows I love durian mooncakes! 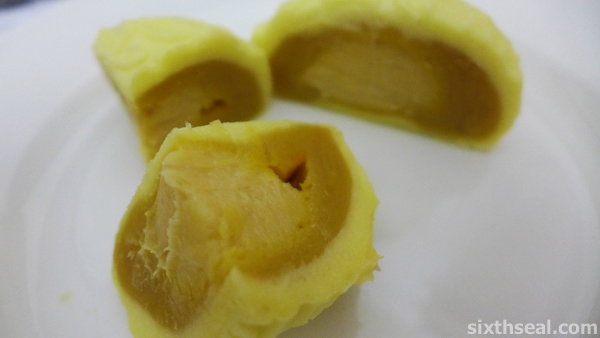 We absolutely adored this mooncake. The durian flesh is unnamed, probably D24 but it’s really good. The skin balances really well with the flesh too so it’s the durian mooncake benchmark for this year! 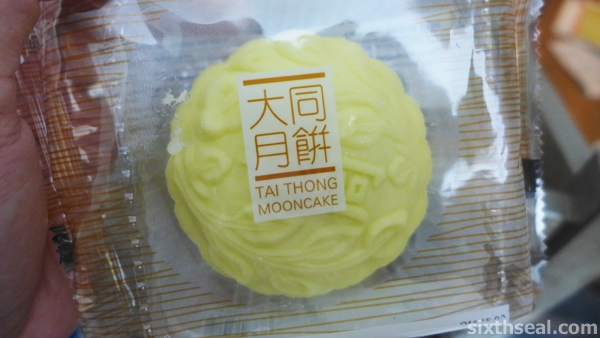 We also wanted to get the Imperial Musang King Royale for RM 78 / 2 pieces but it was sold out! 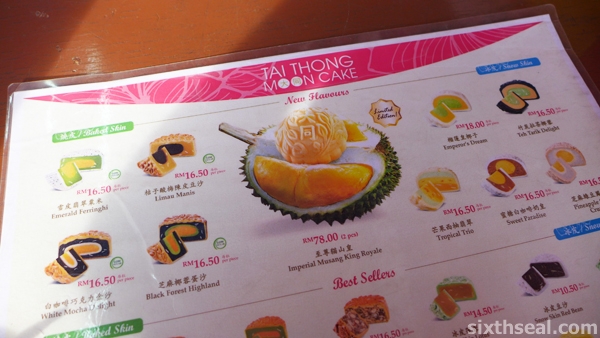 This is a snow skin mooncake from the new flavors under Tai Thong’s moooncake offerings for 2013. They’re having a lot of drink and dessert inspired mooncakes and this is a coffee and custard coffering. 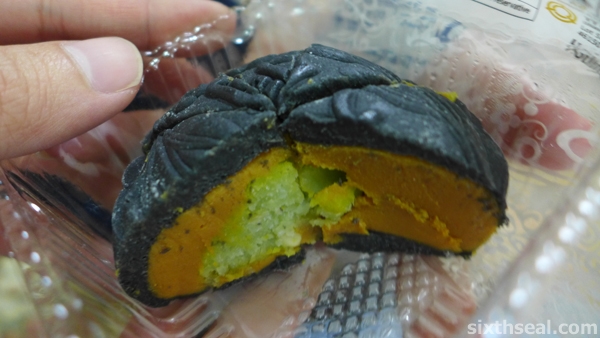 We didn’t really like this snow skin mooncake – the pineapple “egg yolk” is alright but the sesame doesn’t really go well with it.

A low sugar variant (very popular these few years for the health conscious) of an old classic!

This used to be made with lard but a lot of mooncake manufacturers now use chicken to comply with the halal certification (okay for Muslims to consume) which is a shame as this is one of the real original mooncakes and I really doubt Muslims are a huge target market in mooncakes – not enough to make a difference anyway.

It’s the national drink of Malaysia – now in mooncakes. I bought one for us and one of my future-in laws. It was a bit of a letdown though – it wasn’t as tasty as I thought it would be and the pulled milk tea flavor is sadly missing. 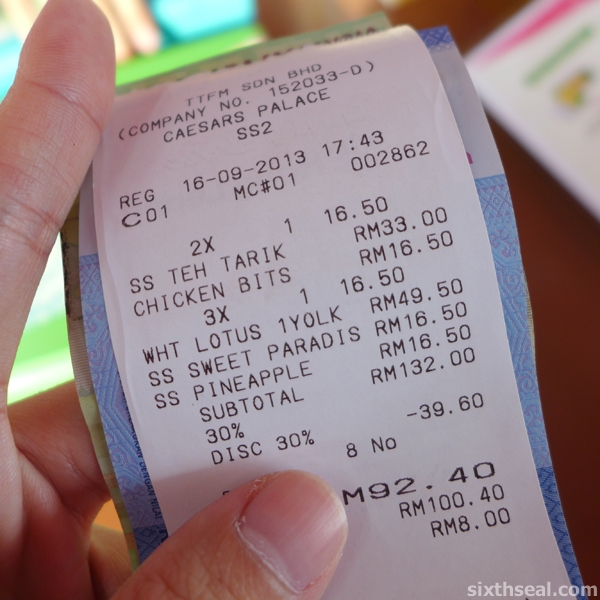 The free mooncakes are:

This is translated as “sweet lime” and it’s a baked mooncake. It continues the trend for beverage inspired mooncake (it’s a common drink here) and actually has a sweet lime filling and an asam jeruk (salted dried plum, or known in the states as crack seed) filling as the “egg yolk”. I think this isn’t doing well, which is why it’s the designated giveaway mooncake on purchase. 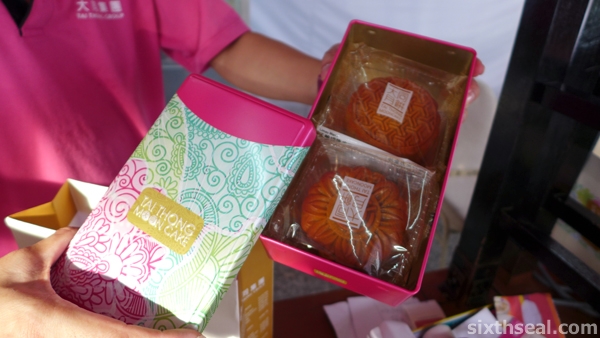 This is another beverage inspired mooncake in the conventional baked format. It has a chocolate and coffee layer but nothing really pops from this. Tai Thong gives out Limau Manis mooncakes for free as default on purchase of every box of 4 but I asked if I can change and the guy there said that this is the only other option he can give out. You can’t change to other similar priced mooncakes and you have to ask to get the White Mocha Delight so I guess these two aren’t exactly flying off the shelves. 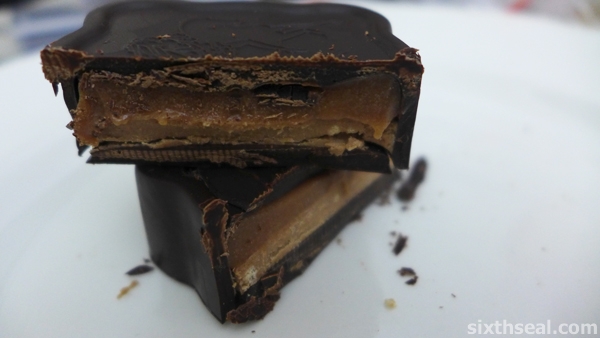 This is a limited edition I got for my better half which cost me RM 159. It’s the most expensive mooncake I ever bought but well worth it. We ate it on the night itself and the entire GODIVA 2013 Mid-Autumn Limited Edition mooncakes was reviewed on a previous post. 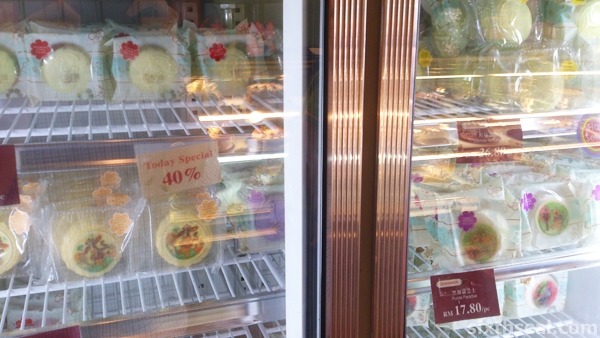 We were just getting some bread one day and saw a huge queue of people buying mooncakes. We didn’t get any that day but there was a Musang King durian mooncake that we had our eye on. I swung over on the afternoon of Mid-Autumn festival and saw that they had a 40% discount across the board! 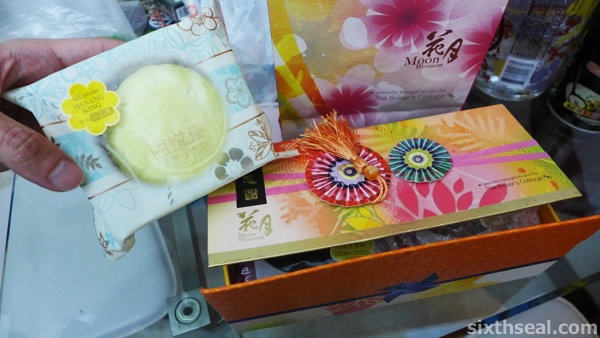 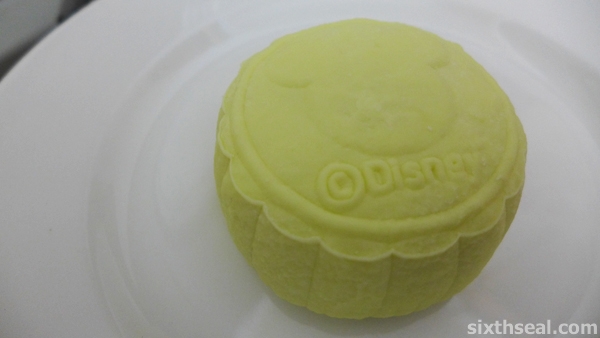 This was slightly disappointing…at first. It’s a Disney mooncake with Mickey Mouse stamped on it. We both looked apprehensively at the filling since it doesn’t have the same “real durian flesh” groove going for it. However, after a couple of bites, it turned out that it was really good in its own way too! I’ll say it’ll give Tai Thong’s Snow Skin Durian Coulis a good run for it’s money. Note the difference between the fillings though – this doesn’t have an interior “egg yolk” of real durian flesh: 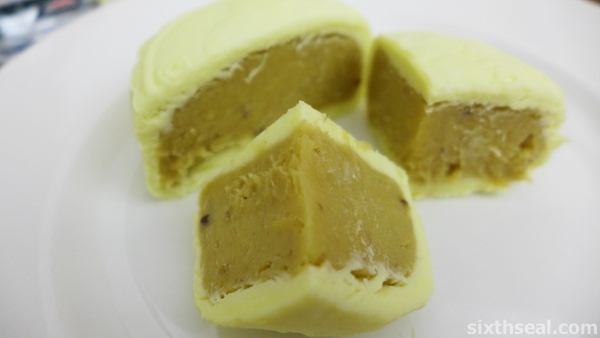 The Bakington version is made with Musang King durians, which explains the price premium. It’s a licensed Disney product too. 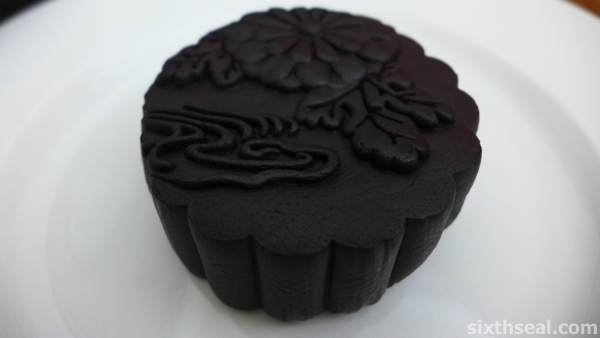 I know that my dear loves Oreo (have bought chocolate covered Oreos for her before) and this mooncake seems very promising. It’s a baked mooncake and it’s good but it’s nothing to write home about. It’s just passable but not really breaking any new ground. It does have real Oreo cookies inside though. 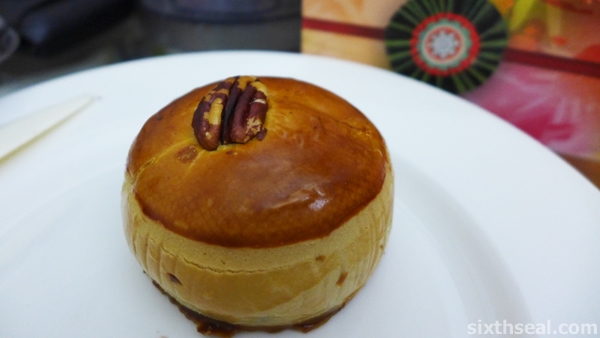 This outstanding mooncake is what the both of us liked the most this year! It was heavily promoted by The Baker’s Cottage – there’s a huge poster saying something along the lines of “2013 new flavor” and so I decided to get one of it to check out. 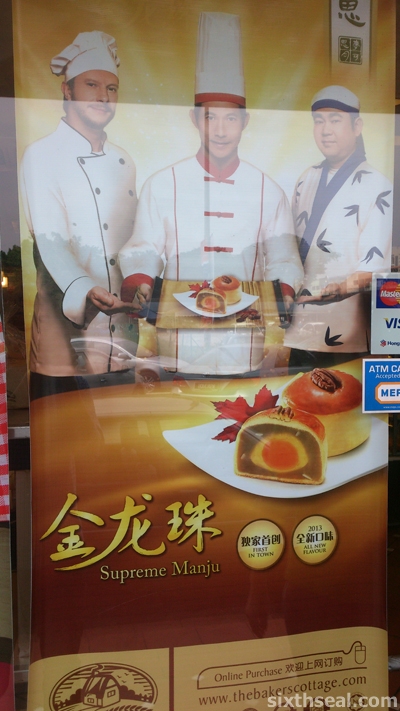 It’s bubble wrapped and treated with a lot of respect. This one is baked in-house unlike the licensed Disney mooncakes…and it’s delicious!

The Supreme Manju truly lives up to its name (which I take to mean “supreme satisfaction”) – it’s a Cantonese style Shanghai mooncake with flaky pastry and a toasted pecan nut on top. There’s just something about the combination of the style of the mooncake (always loved Shanghai style pastry over baked or snow skin mooncakes) with the salted egg yolk, mung bean and lotus seed paste combined with maple and custard. 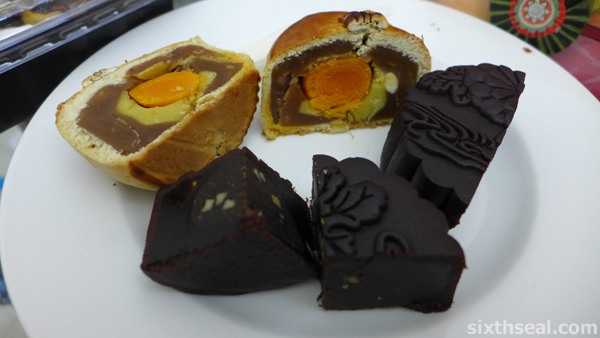 It just works! We just opened it last night (as in Saturday night) and we both loved it! It’s not only cheaper than Tai Thong’s offerings but it’s a new flavor that is so edible, so delicious that my dearest told me it makes you want to have another bite just after finishing one. I agree, the flavor profile is amazing and I wish I had gotten more of this flagship bakery mooncake. It get the title of Best of 2013 from us! 🙂

I call this the Silat Buah Edition of my continuing bread story!

It’s the season for mangosteens now. Mangosteens season is the end of the year and the smaller ones do not have seeds, making it perfect for sandwiches!

It’s a refreshing experiment but to be honest, not all that good.

I saw this jar of local government FAMA produced belimbing (starfruit) jam on sale once and bought a tub of it. I then sauntered over to the fruits section and got myself 3 starfruits.

I decided to slather the starfruit jam and then cut starfruit slices on top of it to make a starfruit sandwich with real fruit.

I had to choke it down – the jam is crappy and almost inedible, full of sugar and a weird flavoring that has little to do with starfruit. Another one of my failed experiments. I still can’t bring myself to eat the jam – it’s still sitting in the fridge after another try on it’s own. Vile stuff.

You can get the fresh ones at SS2 night market. I found it much better than the ones at the local hypermarket. It’s one of the more expensive fruits around at over RM 9 / kg. I just slid the fruit between bread since it’s quite flavorful by itself.

It should probably be noted that seeds should be taken out before inserting into bread. It’s pretty good – especially when paired with cream cheese spread!

It might be heresy to some to use the precious durian as a sandwich filling. It’s expensive (recently bought a Holo durian for RM 33 with less than 10 seeds, costing over RM 3 each) so I used the more common D24 strain (RM 6 / kg) for this experiment.

Nope, I still consider it a waste – I had to use about 4 seeds to gather enough flesh for a sandwich – it’s good, but durians deserve better treatment.

I saw this juicy local fruit at RM 8 / kg from a local roadside stand and it turned out to be one of the best sandwiches I’ve ever made! 🙂

The secret is chunky peanut butter.

This is the tropical version – salty and buttery and sweet with refreshing bursts.

…this is the eureka moment, I discovered something I’ll really continue eating. It’s truly a great fruit sandwich! 🙂 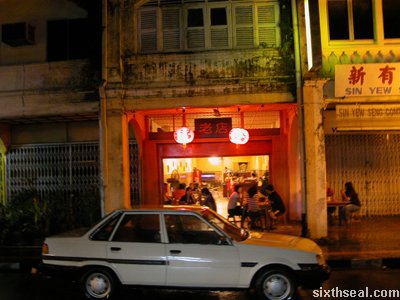 Old Shop is the strangely named cafe along Jalan Padungan than
embraces the old days in the decor while maintaining a modern menu
repertoire. It blends well into the existing old and moldy looking
architecture of the old part of Jalan Padungan. 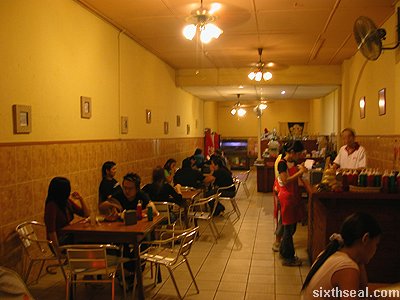 Old Shop or lau tien as it is simple called in Chinese is
usually packed at nights and yesterday night was no different. It
offers a menu which lists anything from NZ Tenderloin Steaks to local
fare. They also serve alcohol. Old Shop is indeed a place of contrasts
between the new and the old. 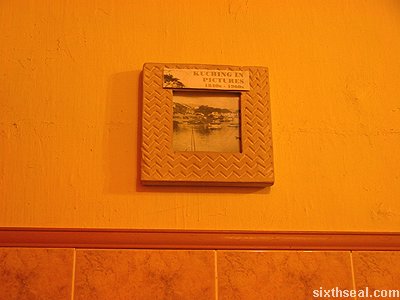 The walls of the interior are decorated with the occasional black
and white picture which shows Kuching back in the old days. Yet, the
back of the cafe is filled with a full bar serving alcohol. The place
is contradictory, and it pulls it off well. It embraces both the past
and the present. 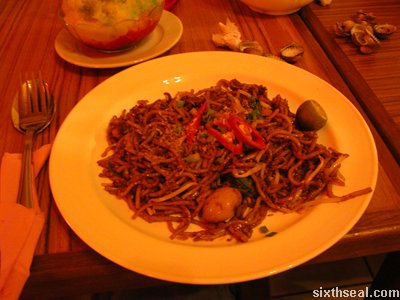 Well, despite all the customers ordering mostly Western fare, it has
been my policy to try out the eating establishment’s flagship dishes
first, and I tend to lean in favor of the dishes that are named after
the cafe or restaurant. The above shows Old Town Fried Noodles. Please
ignore the baked cockles in the frame, there were eight of us who went
there last night and we ordered baked cockles to eat. 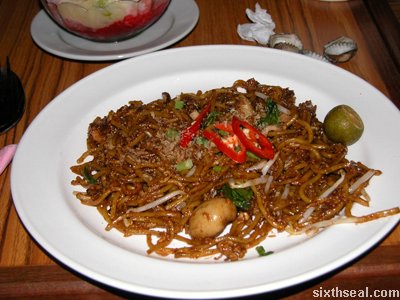 Going back to the Old Town Fried Noodles, with a flash shot this
time, it tastes really good. I squeezed the lime onto my spoon (to
separate the lime juice from the pips – this is the old skool way to do
it) and splashed it liberally on the fried noodles before eating it. It
tasted wonderful, it’s salty and there’s enough seafood and meat to
give it a good texture. 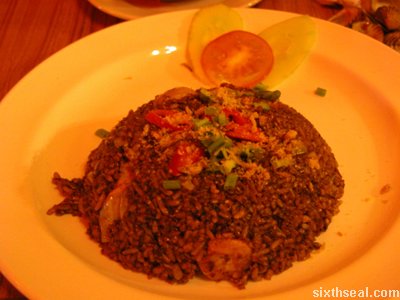 Since I was pretty hungry, I also ordered the Old Town Fried Rice.
That’s the only two dishes that are named after the place, so I figured
I might as well eat the both of them. 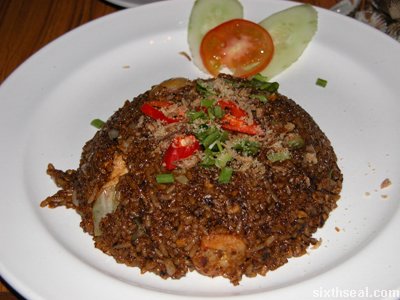 Here’s a clearer shot of the Old Town Fried Rice. It is fried in the
same sauce that gives the fried noodles such a great and different
taste. There are treasures like bits of prawn, cuttlefish, sotong and
meat hidden inside to surprise you. It tastes good and it’s good value
for money at RM 4.50. 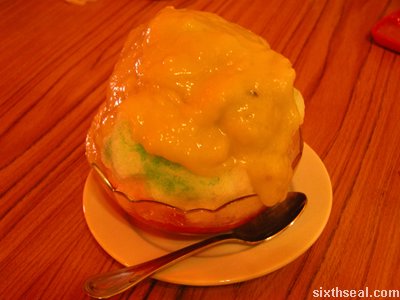 I finished the meal off with Durian Shaved Ice. It’s a mountain of
shaved ice with the usual suspects inside, topped off with a liberal
dousing of fresh durian paste. 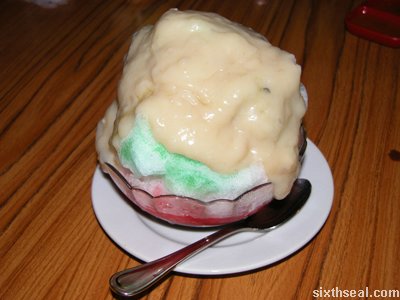 My friends asked me whether the fresh durian paste is really fresh.
It’s not. I didn’t have time to go to the toilet this morning and I can
feel the Durian Shaved Ice screaming “Let me out!” right now. Excuse
me…